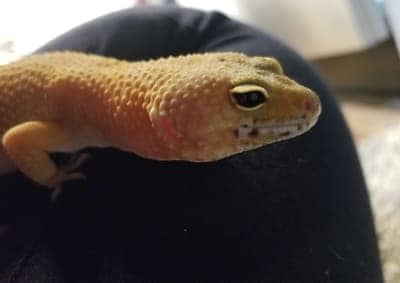 If there’s one thing true about leopards geckos, then it’s that they are very tidy and clean lizards by nature.  Just like most animals though, they can start to stir up a bit of a smell once things start to become a little dirty inside of their tank.  There are a few culprits that can cause this stench, but with a little action, you can get rid of the odor in no time.  Here’s why they smell.

Why does my leopard gecko smell?  Leopard geckos themselves aren’t smelly animals, but the odor-inducing things inside of their tank may make it seem that they are.  These things include feces, urate, and dead insects and will have to be removed to eliminate the smell.

No matter how clean an animal is, pee and feces trapped in a relatively small enclosure will start to become pretty stinky over time if not picked up.  There are things that can be used to neutralize the odor, but ultimately, you’ll want to stay on top of removing all of that nasty stuff so that your leopard gecko, enclosure, or room, won’t stink.  That said, here’s what you should do. 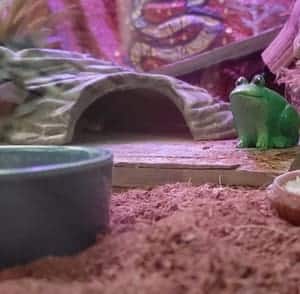 As stated above, leopard geckos aren’t smelly animals, but the tank’s that they’re enclosed in can start to produce a pretty strong odor if not regularly maintained.  That said, in order to prevent or stop your enclosure from smelling bad, you’ll need to clean or replace some of the items that are within the tank.

For example, some substrates will need to be replaced more frequently than others but for most of them, they will need to be cleaned or replaced 1 to 2 times a month.  For substrates like paper towel though, you’ll need to replace that a lot more often as it is fragile and less durable than a lot of other substrates out there.

Other substrates like slate rock, stone tiles, or Eco Earth, will need to be cleaned or replaced a lot less frequently.

The reason it’s important to clean or replace your substrate this often is because substrate holds bacteria and a lot of this bacteria comes from fecal matter and urates.  Not only can feces and urate start to make your leopard gecko and tank smell pretty bad over time but it can also make things a lot less sanitary for you and your leopard gecko as well.

Leopard geckos are pretty good at making sure they handle their ‘business’ in one designated spot within their enclosure, but that still doesn’t mean that they’re not tracking their bacteria all around the tank and onto your hands when you hold them.

If you’re currently using a substrate like paper towel or newspaper and you want something that you won’t have to replace as often, then I recommend checking out this Eco Earth substrate here over on Amazon.

All tanks will start to stink if the substrate isn’t replaced often.  But if you have a substrate like that, not only will it reduce to amount of times that you will have to replace it, but it will also help tremendously with cutting back on the smell by having the ability to absorb more feces and urate without it soaking onto the floor of the tank as quickly.

On top of that, you’ll also want to make sure you’re spot cleaning your leopard geckos urates and feces as soon as you see them as well.  A nice pile of either one can and will produce a harsh smell very quickly if not picked up.

If your leopard gecko’s tank stinks and it needs to be cleaned out then the one and only way to get rid of the smell is to clean it.

But, if your leopard gecko has recently made a bowel movement in the tank and you’re noticing that it’s causing a bad odor inside of it or in the room that they’re enclosed in, then I suggest taking a look at this scent neutralizer here made specifically for reptiles.

Cleaning and replacing your equipment every single time an odor has formed would be time-consuming and expensive.  So if you’ve already maintained your enclosure for the month and you smell an odor that isn’t very pleasant to your nose, then that odor eliminator should do the trick.

In addition to that, another, but least effective way to try and get rid of bad odors coming from the tank is to simply open up a window.  Doing this may not be as effective as using an odor-eliminating spray, but it will help with allowing some of the smelly air to blow out the window instead of just circulating throughout the whole tank and room.

Give Them a Bath 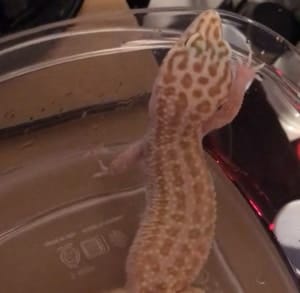 As stated above, leopard geckos themselves aren’t bad-smelling creatures.  But if the tank starts to stink because of a large accumulation of feces and urate, then the smell very well could spread off onto your lizard.

The reason for this is because leopard geckos are very curious animals and they like to explore.  And because of that, it’s likely that they’ll be frequently walking through their feces and urate, therefore, causing them to stink as well.

In order to help get rid of the smell after thoroughly cleaning their tank and replacing their substrate, giving them a lukewarm bath in shallow water will work wonders for getting all of that icky odor-producing matter off of them.

Just keep in mind that before you start their bath, you’ll want to make sure that the water is no higher than the bottom of their bellies so that it’s not getting in their face.  Once you place them in their container or whatever you choose to give them a bath in, get a washcloth and gently wipe their bodies off with the warm water.

Some washcloths are abrasive, so be very careful with not pressing down too hard on their skin as this can potentially cause it to become irritated.

Also, while giving them a bath, make sure to not leave them unsupervised as well.  Leopard geckos are known for being good at making quick escapes.  So to prevent that, keep an eye on your gecko the entire time.

If the odor you’re smelling from your leopard gecko is pretty strong and you haven’t cleaned their tank out in a while, then what you’ll want to do at that point is make sure you’re keeping everything nice and sanitary to avoid spreading any harmful bacteria around the house or to other people.

That said, here are a few ways you can do that:

Basically, you’ll want to do everything you possibly can to avoid spreading any bacteria that they may be carrying on their body.  The reason for this is because if a leopard geckos bacteria enters into your body, this bacteria can have ill effects on your overall health and make you feel pretty crummy until your body fights it off.

Having said that, if you’d like more in-depth information on the kind of bacteria that they can give to you, then I suggest taking a look at this article here that I wrote to help you understand it better.

Staying sanitary is not only something that you should do with leopard geckos but also with other household pets as well.  Whether you’re cleaning out your leopard geckos tank or changing the litter in a litter box, it’s best to always practice good hygiene when handling anything carrying large amounts of bacteria to avoid getting sick. 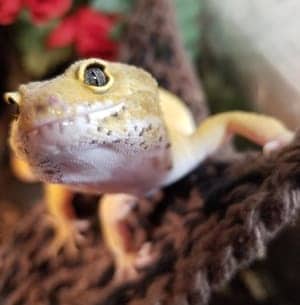 If your leopard gecko stinks, then chances are that it’s either the conditions of the tank that’s making it appear as if they do or the possibility that they may have just made a bowel movement prior to you noticing the smell coming from them or their enclosure.

If you haven’t changed out your tank’s substrate in a while or haven’t performed a deep clean in the past month, then it’s likely one of those two potential culprits for why you smell the horrible odor coming from your leopard gecko or the tank.

If you believe that one or both of these potential causes could be the reason for the smell, plan to dedicate a little time to cleaning everything out so that you can hopefully get rid of the smell once and for all.

Also, be sure to check your tank for any droppings regularly as that could be a potential reason for why you’re smelling a bad odor as well.  Feces and urate that isn’t picked up on a regular basis can start to stink over time if left in the tank long enough.

So with that said, be sure to check your tank every single day for either one of these two things to prevent that from happening.  If you do all of that, then you should never have to worry about an overly smelly tank or leopard gecko for as long as you stay on top of maintaining everything.