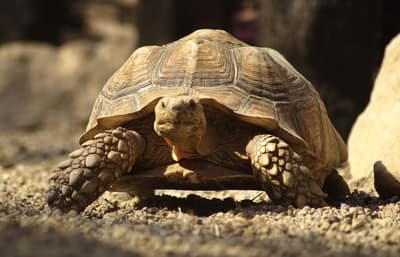 Has your tortoise ever taken one look at you, seemingly in the same mood as usual, but then squared up and ran right at you? It can be an intimidating experience to go through, especially if your tortoise is generally slow, docile, or standoffish. However, this is generally just normal tortoise behavior, especially for hungry tortoises at mealtime!

Why does my tortoise charge at me? Tortoises can charge and even become aggressive towards their owners, but this is not a bad thing — they may be trying to work off mating hormones, getting territorial over their enclosure, or maybe they are just hungry and running towards you for their dinner!

In this article, we will list a few of the reasons that tortoises might charge at you or become aggressive, as well as some of the ways that you can calm your tortoises down or avoid having them charge at you. 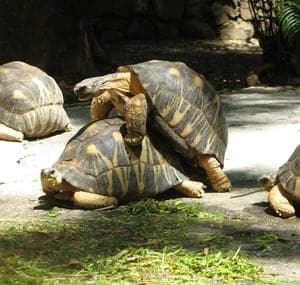 If you own multiple tortoises, especially if one of your tortoises is a female and the other is a male, you may see your male tortoise charging more often than normal at some points in time.

This can happen when female tortoises go into heat while in the same vicinity as a male tortoise, during which the male tortoise will be able to smell the pheromones, or mating hormones, that the female turtle gives off.

Because tortoises are not very social creatures, they can often become aggressive when faced with the prospect of mating, sometimes butting or banging their head against objects in their enclosure or even you or the other tortoise.

During this aggressive outburst, your tortoise may charge at the female tortoise, or at you if you are in the enclosure. If this behavior worries you, it is fine to separate the two tortoises for the duration of your female tortoise’s heat, as long as both tortoises have an adequate amount of space and enough stimulation to keep them happy and healthy.

If you have more than two tortoises, or specifically multiple male tortoises and one or more females, special care should be taken with displays of aggression. Oftentimes tortoises can become territorial and bully smaller tortoises around them by biting, headbanging, or charging at them.

Some tortoises, such as Mediterranean breeds of tortoise, are more prone to aggression than others. In addition, if a female tortoise is in heat around more than one male tortoise, this can prompt displays of aggression as the males fight for dominance over the female in heat.

Again, if aggression is becoming an issue with your tortoises, consider separating them into different enclosures for the duration of the female tortoises heat, or until your tortoise’s aggressive tendencies settle down a bit.

Tortoises can be very territorial animals. If you have recently brought your tortoise home, or if you have moved into a place where a tortoise is already being kept as a pet, that tortoise may not be accustomed to having you in their space.

A tortoise’s enclosure or habitat is much like a person’s home, in that the tortoise sees it as their own space and will be wary or even aggressive towards any potential threats that they may see within the enclosure.

You may also encounter similar behavior if you have a tortoise that has been in their enclosure for a long time, and then you bring another tortoise home as a new pet. While tortoises can live in the same enclosure together, it may take a little while for them to warm up, especially if one tortoise has been living there for a considerably greater period of time than the other.

Tortoise territorialism, like with mating instincts, can often show itself in the form of aggression. While tortoises may ram into other tortoises in their habitat as a show of aggression or display of dominance, they may also do this to you as an owner if they are nervous or feel unsafe around you.

Always make sure to treat your tortoises gently, to foster a good dynamic and relationship between pet and owner.

Female tortoises can become especially territorial if they are gravid, or holding unfertilized eggs in their body. This is one of the more common reasons behind tortoise ramming, as gravid female tortoises feel much more of a need to protect themselves and their habitat due to the possibility of young tortoises being born into their space.

If your tortoise is gravid, give her plenty of space and ensure she has a proper and naturalistic place to lay her eggs. If you suspect that your tortoise is egg-bound or otherwise having trouble passing her eggs out of her body, take her to a vet or reptile expert for assistance. 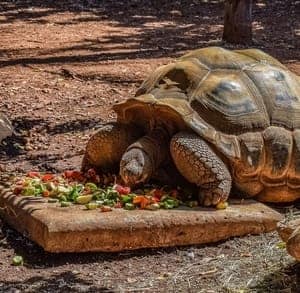 One completely harmless reason that your tortoise might be running at you is that they could just be excited for mealtime! Even if they are not in a particularly aggressive mood, tortoises may also charge at you when they are hungry.

This is not necessarily a bad thing, even if it does seem intimidating to have a large tortoise running at you full tilt. Sometimes tortoises are just hungry and very excited to see you at meal time, especially if you have had your tortoise for long enough that they now associate your presence with a tasty, fresh, varied meal.

However, if you see your tortoise charging at you in a way that seems aggressive or desperate, especially during multiple feedings in a row, you should take a look at their diet to make sure that they are eating enough food and therefore does not get too hungry between regular feedings.

In order to make sure your tortoise does not feel like he is lacking proper nutrition, it is best to focus on giving them the best possible diet you can. Tortoises should be given a diet that consists of different types of food, namely tortoise pellets, which can be bought at pet stores, as well as protein sourced from insects or mealworms, and dark, leafy green vegetables.

You can toss in a green or yellow bell pepper every now and then for color as well, or fiber-rich vegetables such as broccoli and cauliflower. Greens and other healthy produce should take up about 80% of your tortoise’s regular diet, while fruit and sugar-heavy vegetables should only take up about 5-10%.

You can also fill out your tortoise’s meals with commercial tortoise food or alfalfa hay. A general rule of thumb to follow is that, just like with any animal you keep as a pet, tortoise diets should mirror — as closely as possible — the types of food your tortoise would find if it were scavenging for food in the wild. This will ensure that your tortoise is getting just the type of nutrition that its body is built for.

Tortoises may charge for a variety of different reasons, from territorialism to mating hormones, and even to plain old hunger. If your tortoise is charging aggressively, or running at you combined with biting or headbanging, it may be attempting to show a display of authority over its habitat, as tortoises can be very territorial creatures.

These territorial tendencies are even more exaggerated in gravid turtles, who can become incredibly aggressive while trying to find a place to lay her eggs and keep her young safe. Tortoises can also become aggressive during mating season, whether it is a male tortoise charging a female tortoise in heat, two male tortoises facing off in a show of dominance, or a male tortoise seeing you, the owner, as a threat to its claim over a female in heat.

Tortoises may also charge less aggressively if they are expecting mealtime, as they may just be hungry and excited because they know you are bringing them food.

If tortoise aggression between multiple tortoises is becoming an issue, do not be afraid to separate your tortoises. If this issue is extended past mating season, or between tortoises who just can’t seem to stop fighting even after a long period of time, you can ask a vet or reptile expert at your local pet store about ways to counter tortoise aggression.

However, if your tortoise is only charging you at mealtime, there is likely nothing to worry about — in fact, you should consider this a sign of affection from your tortoise, as it proves that your tortoise trusts you to feed it well and at regular times.