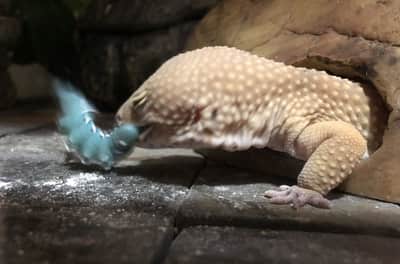 Despite being so small, leopard geckos have a surprisingly large appetite.  Some will keep eating as long as they keep getting fed and others will stop as soon as their stomachs can’t hold any more food.  From what I’ve seen, most leopard geckos know when to stop.  But for all the other ones, knowing when to pump the brakes can prove to be a little challenging.  Here’s why.

Why is my leopard gecko eating so much?  Leopard geckos will usually eat a lot when they’re young, when eating highly-addictive insects, or when eating insects that don’t carry a lot of nutritional value.

I wish there were one straight answer when answering a question like this but because there are so many factors that can be at play, it’s hard to tell unless you take all things into consideration.  If you feel that what you’re experiencing with your leopard gecko is the cause of one of the reasons I mentioned above then stick around as I have some information that might just help you. 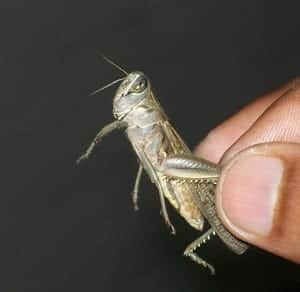 As mentioned above, most leopard geckos do seem to know when to stop eating.  When it comes to some geckos though, achieving this may take a little more work.  As an alternative to just letting them eat until they stop, there are two other things that you can do that might help in making sure that you don’t overfeed them.

The first thing is to limit the amount of food you’re giving them.  It sounds simple, but because some leopard geckos can’t seem to stop eating, knowing exactly when to stop can be a little bit difficult.

First and foremost, because most owners feed their leopard geckos crickets and mealworms, these are the two other insects that I’ll be going over since those feeders are what most everyone in the leopard gecko community is used to feeding their geckos by now.

That said, for crickets, you’ll want to limit their intake to only about 5-8 per feeding as crickets have enough nutritional value to meet your gecko’s needs until it’s time for their next meal.

Keep in mind that leopard geckos can go quite some time without food because of the fat and nutrients that they store and take from their tails, but because we want our geckos to gain and maintain their weight, undercutting too heavily when it comes to how much they should eat probably isn’t the best idea.

Give them at least that many crickets and be sure not to cut it any lower than that so that they can remain nice, plump, and healthy without gaining or losing too much weight.  If your gecko leopard gecko is younger feed them around 7-8 and if they’re older feed them around 5-6.

It varies from gecko to gecko how much food should be given but between 5-8 is a good place to start when trying not to overfeed them.  Last but not least, if you’re someone who uses mealworms, don’t feed your leopard gecko more than 20 at a time.

20 mealworms per feeding is the highest that you should go but instead of putting all of your mealworms in at once, put one in your food bowl at a time and see if they stop eating before reaching 20.  If your leopard gecko eats up to 20 then stop feeding them.

Another way people have said to feed your leopard gecko is to place their insects down in front of them for 15 minutes and allow them to eat as much as they can until reaching the 15-minute mark.

A lot of food can be given to them in the span of 15 minutes, so before trying that method, try the other one first as that one seems to be a little more effective and healthier.

Highly addictive insects like those are the cheesecake of insects and should be treated as such so that you don’t accidentally overfeed your leopard gecko and cause them to have issues with their weight that can be very hard to reverse once they get to that point.

As I’ve mentioned before, when dealing with fattening and unhealthy insects like wax worms or butter worms, you’ll want to make sure that you’re giving your leopard gecko no more than 1 or 2 about once every two weeks.

Leopard geckos who are loaded on these bugs will not only become addicted to them to the point where it’s hard getting them to eat anything else but most of the time they’ll also become very obese and unhealthy.  If you don’t believe me, then check out this article here that I wrote where I go into a little more detail about what you can expect when that happens.

There’s absolutely nothing wrong with those specific insects, but when they’re fed to your leopard gecko in excess, you’ll find that they’ll start to have a very hard time trying to stop eating.

If those insects are what you’re feeding your leopard gecko exclusively, then I recommend checking out this page here where there are much healthier options to choose from.  Getting your leopard gecko to stop eating addictive insects can be a struggle but it has to be done in order to get them back down to a healthy weight. 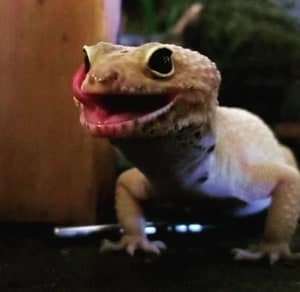 The reason for this is because leopard geckos that are young still have a lot of growing to do, so because of that, their bodies require a lot more nutrition.  It’s sometimes a mystery how leopard geckos who are small are able to fit so much food into their stomachs but somehow, they do.

Some people say that when giving a baby or juvenile leopard gecko food, it’s impossible to feed them too much because of the fact that they’re still growing.  Because that’s not entirely true though, I still recommend limiting how much they eat so that you don’t have any future issues with their weight.

It’s true that younger leopard geckos require and will eat more food than geckos that are older, but that doesn’t mean that they should be fed how many ever insects that they want.

For example, when people hear a statement like that, they may assume that they can load their gecko up on the fattiest of insects available.  But because that’s still unhealthy despite their age, feeding them that way is definitely not recommended.

Owners can be a little more lax when it comes to younger geckos but it’s also important that we’re being reasonable as well.  They may be able to eat more than any other leopard gecko of a different age group, but that doesn’t mean that we should go overboard with feeding them.

If you’d like to know how much you should feed them then refer to the eating rules above.  Not every leopard gecko will eat the same so it’s hard to give exact numbers for how much each owner’s Leo should eat.  But because having a guideline to follow is better than nothing, the eating rules mentioned above can be very useful.

If you’d like to know the nutritional value for each insect that you’re feeding them so you can have a better understanding of how many nutrients are going into their body, you can always take a look at this source here.

It can be quite worrying whenever your leopard gecko doesn’t seem to want to stop eating but depending on your individual circumstance, it may actually be very normal.  Age along with what type of feeders they’re being fed play a huge factor in this issue and is usually almost always the reason as to why most owners end up going through this.

Before assuming that anything is wrong with your gecko, take all things into consideration first before getting too worried.  If your leopard gecko is fairly young, then that’s probably the reason.  If they’re eating highly addictive feeders, then that’s likely the reason.

If neither of those are potential causes though, then it’s probably because they just don’t know when to stop.  As I mentioned above, most geckos do know when to.  Because some don’t though, it’s our job as responsible owners to make sure that they don’t go overboard.

Overeating is an issue in itself and is something that you don’t want to go through.  Not only will it require you slowly cutting them back on the amount of food that they’ve been eating, but it’ll also require you having to help them lose weight that they may have accumulated over time as well.