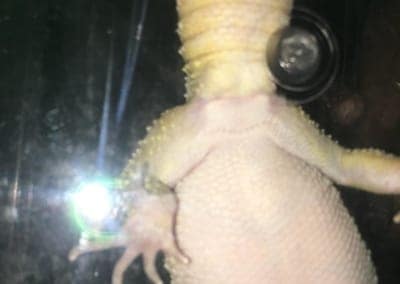 I don’t know about you, but whenever I see a lump, I get worried.  Nothing good has ever come from a lump, and when they pop up that usually means it’s time to visit the doctor, or in your leopard gecko’s case, the vet.  While a lump under the tail is worrisome, sometimes it’s nothing to worry about, but other times, it is.  To find out what it could be though, I suggest reading on.

Why does my leopard gecko have a lump under its tail?  In male leopard geckos, the lumps you are seeing are likely their hemipenes.  These are the two bulges underneath their vent that contain their intromittent organ, and this organ is used to mate with other leopard geckos.  If the lump is abnormally large though, it could be something more serious.

Although all male leopard geckos have those two little bulges underneath their vent, that doesn’t mean that females can’t get bumps in that area as well.  There are a few factors for why you could be seeing bumps down there, but the most common reason would definitely be that you have a male and that’s just what they’re born with.  For other potential causes though, please read on. 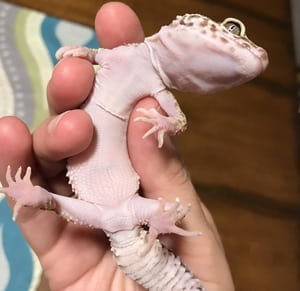 If you find a lump under your leopard geckos tail and you’re not sure what it is then it is likely one of three things, but since we’ve already discussed the first thing, let’s move on to the second.  Unlike the third reason we’ll be going over, this one isn’t as bad and is something that is a fairly common occurrence amongst not only leopard geckos but reptiles in general.

Although the word “abscess”  sounds serious, it’s not that bad and can usually be easily treated with a quick visit to the vet.  If you don’t know what an abscess is, then it’s a pretty much a large mass of pus, or better yet a mega pimple that just keeps growing and growing.

As far as I know, leopard geckos don’t get pimples, but if they get a cut and it becomes infected, then it could very easily turn into an abscess.  There are many reasons why a leopard gecko could get a cut, but one of the most common reasons would definitely have to be from getting bitten by feeder insects.

You may think that feeder insects wouldn’t pose as much of a threat as they do to your leopard geckos health because they are so small, but you have to also keep in mind that your leopard gecko is small as well.

Once the cuts have been created and bacteria from feces or soiled substrate gets into them, over time, an abscess will form.  Although it’s nothing serious to worry about if caught early, it’s not something that will clear up on its own and you will need to take your leopard gecko to the veterinarian to get it drained out.

If left untreated for too long, the abscess will grow larger and larger and will likely cause your leopard gecko more health problems than they already have.  So once you spot insanely large lumps underneath your leopard geckos tail, then you’ll want to get them seen ASAP.

Also, if you’d like to minimize the chance of your leopard gecko being attacked by feeder insects, then I suggest checking out this page here that I put together for other alternatives.  There’s nothing wrong with feeding your leopard gecko crickets and other large insects that are capable of biting, but they have been known to attack, so consider choosing a different feeder insect if you want to lower the chances of that happening to your gecko.

Aside from bug bites though, your leopard gecko could also experience cuts from a specific type of substrate called bark chips.  I have not seen a lot of people use this particular substrate, but if you’ve ever considered it or if it gets recommended to you in the future, please don’t get it.

There are much safer alternatives out there that can be used that won’t cause your leopard gecko to experience any skin irritations.

It’s a rare occurrence, but believe it or not, tumors are something that not only leopard geckos go through but many other reptiles as well.  It’s sad when they show up because they are usually cancerous and unlike human treatment, there’s really nothing that can be done about them.

According to this source though, cancerous tumors that haven’t formed on or spread to parts of the body that can’t be amputated will give you the most success in getting rid of it altogether.  But, if they do form on places like the kidneys or in the head then, unfortunately, your leopard geckos days may be limited.

But, if one grows on the tail, then you may be in luck since these can be amputated with no negative effects to your gecko’s health.  As I said though, cancerous tumors can spread, so the sooner you get them to the vet, the better.

While abscesses are one monster to deal with, tumors are on a whole different level of seriousness.  So if this is something that you’re currently experiencing, please don’t take it lightly and get to your nearest veterinarian as soon as you possibly can to have a chance at saving their life.

The Difference Between the Two 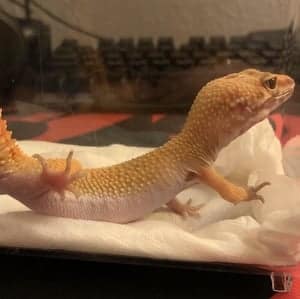 Because both abscesses and tumors can present themselves in very similar ways, it’s good to know which is which so that you can know exactly what you’re dealing with.  And as you now know, abscesses are large masses of pus or air underneath the skin and can be opened up, drained, and treated fairly easily if it hasn’t spread to other parts of your gecko’s body.

Tumors, on the other hand, are large masses of tissue and because they’re not liquid, they can’t be drained as easily and are sometimes cancerous.  While both are can form on any part of the body, abscesses are known to be more on the softer side while tumors are said to be more on the harder side.

This doesn’t mean that tumors can’t be soft as well, because they definitely can, but it is a little less likely simply because they’re not filled with fluids or other bodily substances that aren’t as solid as masses of tissue.

Instead of guessing whether or not your leopard gecko has one or the other though, it’s best to seek out professional advice.  It’s not safe to try and diagnose your leopard gecko with anything, especially something this serious, but it’s good to know what the symptoms are so that you can kind of get an idea of what they may have.

While some things that leopard geckos experience can be easily determined, this isn’t one of those things and should be closely examined by someone who is highly experienced in handling situations like these.

Lumps can cause various different issues like digestion problems, breathing problems, and even irritation.  Of course, the symptoms they experience will differ depending on where it’s located, but because both abscesses and tumors can spread, they both pose a pretty serious threat to your leopard geckos health and like most illnesses and diseases they go through, it won’t go away on its own.

If you suspect that your leopard gecko is experiencing either one, don’t wait, schedule an appointment immediately.

Lumps are scary and nothing to play around with, so as soon you as you see one pop up, reach out to your nearest vet.  A lot of the times, they aren’t anything serious and can be treated fairly quickly, but to be on the safe side, all lumps should be treated as if they are serious.

Just like humans, leopard geckos can develop them at any time and also like humans, they will need to be treated before things progress.  If you have an abscess or tumor, you go to the doctor to get it treated, and the same goes for your pets.

Leopard geckos are tough little creatures who are able to withstand a lot, but they are only able to do so much on their own, so it’s important that we get them the help that they need so that they can live long and healthy lives like us.

We as humans are able to take matters into our own hands whenever we suspect that something is wrong with us, but unfortunately, leopard geckos can’t and they completely depend on us to get them the treatment, care, and love that they need to beat whatever they’re going through whether that be something as little as an abscess or as serious as a tumor.