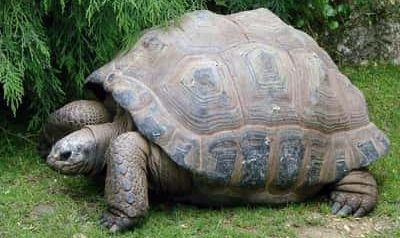 Even if you’ve seen your tortoise backpedal while swimming, it might be strange to observe them walking backwards, whether it’s within their enclosure or outdoors. This behavior, while it may seem odd or funny, is pretty normal and usually nothing to worry about!

So why is my tortoise walking backwards? Tortoises walk backwards to get out of tight spaces and to evade predators and other threats. Another reason your pet may be walking backwards is because its legs are weak and need to be strengthened.

Aside from walking backwards, tortoises display many different habits and behaviors that their owners should be familiar with. In this article, you’ll get a more detailed explanation of why tortoises walk backwards, as well as a comprehensive overview of common and uncommon tortoise behaviors.

When Do Tortoises Walk Backwards?

Just like most living creatures on earth, tortoises are able to walk both forward and backwards. It’s most common to see them backpedal in water, but it’s also possible for them to walk backwards on land.

For example, a tortoise may walk backward if they get stuck in a tight area and can’t get through by walking forward. Another situation in which a tortoise will typically walk backwards is when they encounter a predator. In this case, they’ll back up and retreat into their shell as a way of seeking protection from the threat.

It has been suggested that tortoises are unable to walk backwards while they are turning around a corner, however. Tortoises are also unable to run backwards at high speeds, and if they flip onto their backs, they’re not usually able to flip themselves back over.

In fact, some tortoises have died because of this; they may starve to death while stranded on their backs, or their underside may cook if it’s exposed to the sun for too long. If you see that your tortoise is laying on its back, flip it over to its normal position immediately. 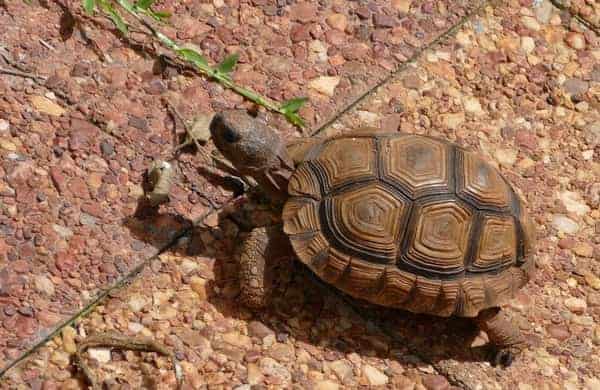 Walking Backwards Due to Weak Legs

Sometimes when a tortoise appears to be walking backwards, this is actually the animal showing its inability to get a grip on a surface due to underdeveloped muscle tone in its legs. Because of this, your tortoise’s limbs may scramble as it tries to get traction and eventually end up moving backwards.

How to Strengthen Your Tortoise’s Legs

First, make sure your tortoise has a healthy, varied diet that provides all of its necessary nutrients. Your pet will also need a basking area that is kept at the proper temperature (around 100 degrees).

You’ll also want to create an environment with many different textures for your tortoise to walk on. You could use a slate feeding dish, various rocks and twigs, and other accessories in addition to plenty of substrate.

Having to grip different textures as it walks around its enclosure will improve your pet’s muscle tone. Finally, once your tortoise has begun to build up strength, you can let it roam freely in a safe area in the house or take it on a walk.

Walking backwards is a typical tortoise behavior, although it isn’t necessarily well-known. To give you an idea of the other general habits and activities of tortoises, we’ve compiled a guide of their common behaviors.

Having knowledge about tortoises’ behavior will give you the ability to figure out if the way your pet is acting is normal or if they’re doing something you should be concerned about.

Tortoises are generally pretty active during the day, but they also need their rest; they typically rest for about 16 hours each day. Most tortoises sleep with their plastron (bottom of the shell) on the ground, with their limbs relaxed and eyes closed.

Tortoises are cold-blooded, so they have a few ways of regulating their internal temperature. In the warmer hours of the day, they’ll extend their head and limbs to expand their total surface area and let off some heat. During the cooler hours, tortoises withdraw their heads and limbs to retain heat.

In the wild, tortoises are mostly solitary creatures, but they do gather around resources such as food, water, and shade. Some tortoises group together at night as a way to retain body heat. As a pet, tortoises are typically adopted alone rather than in a pair or group. Often, pet tortoises (especially two males) will fight, or in the case of a male/female pair, the male may harass the female. 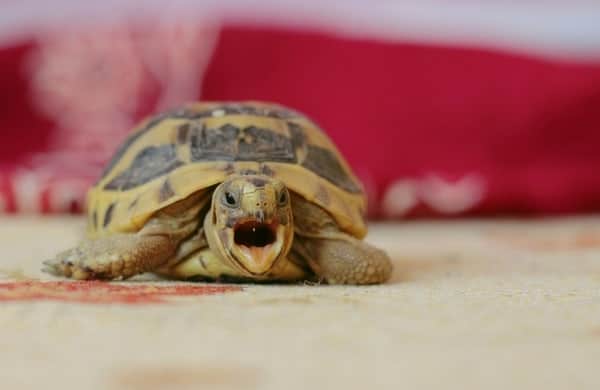 Some of the behaviors your tortoise engages in are considered protective behaviors. These include:

The first behavior, raising the head, is no cause for concern, but if your tortoise displays the other behaviors, they most likely don’t feel comfortable around you. It’s a good idea to try to strengthen the bond with your tortoise so they don’t perceive you as a threat and instead feel safe around you.

These behaviors indicate that your tortoise is ready to fight or to defend itself.

Tortoises are generally quiet creatures. The most common noise you’ll hear from a tortoise is a hissing sound, which they usually make when feeling threatened. Males also make a variety of sounds during the mating process.

Tortoises move at a moderate pace. All of their limbs should display good muscle tone. If they have weak legs, you may see them walking backwards. Try to get your tortoise to engage in regular exercise to strengthen its legs if you notice this behavior frequently.

A healthy tortoise will support its body with two opposite legs, such as the front left and back rear leg, and then alternate to use the front right and back left leg.

Here you’ll learn about some behaviors that aren’t common and that you should pay close attention to. Some of these behaviors are signs of illness, while others are simply less common. 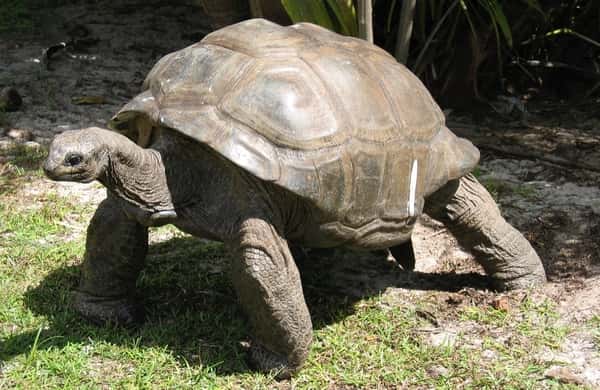 Head banging is normal but may take you by surprise. It’s usually a sign of dominance or mating behavior, and you’ll most often see it when two male tortoises are put together. But your tortoise may also do this to humans or objects that get in their way. Head banging is an assertive behavior that can act as a way to claim territory.

Scratching is relatively common, but it indicates a problem with your tortoise’s environment. It can mean that your pet’s enclosure is too small for them and that you need to upgrade, or that there isn’t enough substrate in the enclosure. Tortoises do get bored and are known for developing “cabin fever” if they don’t get enough exercise and variety in their environment.

Tortoises enjoy digging, so make sure your pet’s enclosure has plenty of substrate. Adding hides and other accessories to their environment is another way to mentally stimulate your tortoise.

Walking backwards is a normal tortoise behavior in moderation. But if your pet walks backwards often and its limbs seem weak, you should make an effort to help your tortoise strengthen its legs so that it is able to walk properly.

Aside from walking backwards, tortoises communicate many different things through their behavior. Knowing their typical activity cycle, protective and aggressive behaviors, and normal noises will help you to be a well-educated pet owner who can identify normal and abnormal behaviors.

Now that you also know about more uncommon behaviors such as head banging, squeaking, and scratching, you’ll be even more equipped to determine whether or not your tortoise is exhibiting typical behavior or if a trip to the vet is needed. The more knowledge you have about your pet, the better you’ll be able to provide for it and ensure it lives a long and happy life!