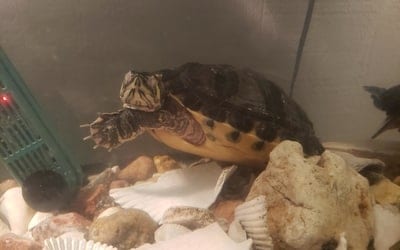 There’s no question about it; turtles love to sleep! But sometimes it can be difficult to tell if your turtle is getting good sleep, or if their sleeping behaviors are normal. The sleeping habits of turtles are quite different from other pets, so it’s a wise choice to learn more about the subject.

So why does my turtle sleep with all his limbs out? Typically, sleeping with its limbs out indicates that your pet is trying to warm up its body temperature. Turtles stretch out their limbs to collect additional heat.

Below, read more about why turtles sometimes sleep with all of their limbs out. Plus, take a look at our advice on ensuring that your turtle sleeps well and stays safe and healthy.

Why Does My Turtle Stick All His Limbs Out? 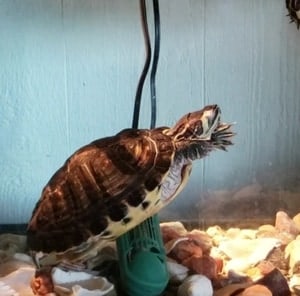 When your turtle stretches out its legs, its feet will most likely widen at the same time. This increases its surface area so your pet can take in even more heat. As your turtle absorbs warmth, it’s able to regulate its temperature. Its metabolism will also increase, and its digestive system and immune system will both work at a higher level.

Other reasons for your pet turtle to stick out all of its limbs are pregnancy and relaxation. The behavior is typically nothing to worry about as long as you keep the temperature in your pet’s aquarium between 70 and 80 degrees Fahrenheit.

Some turtles sleep with their limbs out, while others retract into their shells. This is mostly dependent on their environment and species.

The sleeping habits of pet turtles are definitely different from pets like dogs and cats, and they differ from other reptiles as well. To find out more about their sleeping habits, read on!

Where Do Turtles Sleep? 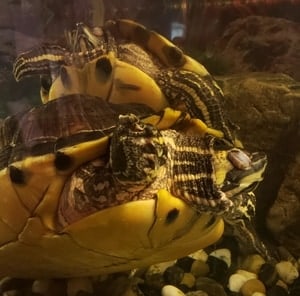 Pet turtles may sleep in a variety of places within their aquarium. They’ll usually sleep wherever they feel the most comfortable. This might be underwater, in their basking spots, or on the surface of the water. You may also notice your pet turtle sleeping at the bottom of the tank, or even floating around under the water’s surface.

Some pet turtles sleep in the same spot night after night, but many will switch up their sleeping location occasionally. One exception is the box turtle, which is a terrestrial animal. This means that they live on land and don’t need an aquarium. Instead, they should live in a dry terrarium.

Some turtles can go from four to seven hours without breathing, but no matter where your turtle sleeps, it does need to breathe periodically. You’ll notice that your turtle will come to the surface of the water, replenish their air supply, and then return to their normal sleeping position.

Can My Turtle Drown In Its Sleep?

There’s no reason to worry about your pet turtle drowning in its sleep as long as there are no obstacles in the aquarium that may keep it from coming up for air. Your turtle will automatically come to the surface for air whenever it needs it.

If your turtle is a baby, however, there are some extra precautions you can take to maintain its safety. Most experts recommend a water level about two and a half times the height of the baby turtle, so that it can resurface without fully leaving the bottom of its tank.

Do Turtles Sleep as Much as Humans Do? 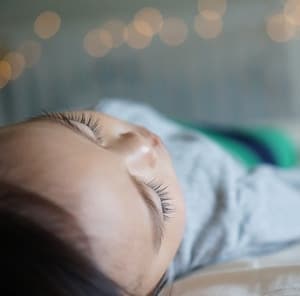 Typically, turtles don’t sleep for a full eight hours like most humans do. Instead, some sleep for two to four hours, and most aquatic turtles will typically rest for four to seven hours. The majority of turtles come up for air periodically. The reason they can stay underwater for so long is because of the cool temperature of the water, which lowers their metabolic rate and means they don’t need as much oxygen.

Tortoises and land turtles, however, sleep a lot more than humans. They may sleep as much as 12 to 18 hours a day, so they’re asleep more than they’re awake. If you’re curious about exactly how much your turtle should be sleeping, research its specific species. There can be quite a bit of variation between different types of turtles.

How to Make Sure Your Turtle Gets Good Sleep

Most pet turtles are diurnal, which means that they sleep at night. To make sure that your turtle sleeps well, it’s a good idea to turn off the lights during the evening to imitate the darkness of the night sky outside.

The reason turtles sleep at night is because they need UVB (ultraviolet B) rays which can only be received during the day as they bask. Pet turtles will also nap during the day while basking.

You’ll also want to make sure your turtle’s water conditions are good, because many turtles sleep underwater. The most important thing is to keep oxygen levels in the aquarium at a suitable level. As long as your tank is large enough for your turtle and you have a working water filter or pump, there’s no need to worry.

What If My Turtle Is Sleeping Too Much? 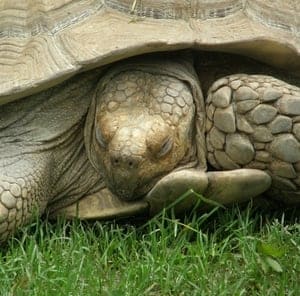 Turtles in the wild sleep more as temperatures fall and winter approaches, but this shouldn’t be the case for a pet turtle. You can fix this by simply increasing the temperature of the water in the aquarium. The temperature should always be at least 70 degrees Fahrenheit.

A simple solution for water that is too cool is to purchase a water heater that can be regulated with a thermostat. You’ll definitely want to keep an eye on the temperature, because if it is too warm it can harm your pet.

One thing to keep in mind is that turtles become less active as they age. It’s normal for older turtles to sleep and rest more than juveniles.

What Happens If My Turtle Doesn’t Sleep Well?

A healthy turtle sleeps well. If your turtle doesn’t get good sleep, this can unfortunately lead to stress and health issues, and your turtle may lose its appetite as well. Increasing the temperature of the water in your turtle’s aquarium is a simple and quick fix. However, if your turtle still isn’t sleeping well after warming up the water, you should take them to the vet to rule out any health problems. 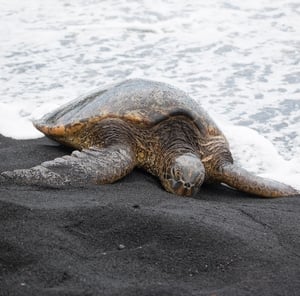 In nature, turtles hibernate (or brumate) during the winter when temperatures drop. This is because food is harder to come by and they must preserve their energy as much as possible. But it’s not necessary for your pet turtle to hibernate.

Some turtle owners allow their pets to hibernate by lowering the temperature in the aquarium below 50 degrees. There are some benefits to hibernation, but there are also risks to take into account.

These include starvation, freezing, and even drowning. Generally, it’s recommended that you don’t let your turtle hibernate unless you plan on breeding it. Hibernation does increase the odds of success in breeding.

If you notice your pet turtle sleeping with its limbs out, it’s generally nothing to worry about and simply indicates that your turtle is attempting to absorb heat. The most important thing is to maintain a temperature of 70 to 80 degrees Fahrenheit within your pet’s aquarium, and to monitor the oxygen level carefully.

Different species of turtles sleep for different amounts of time, so it’s smart to research your turtle’s species to make sure its sleeping habits are normal. Remember that turtles do love to sleep and will often sleep in various positions and in different areas of their aquarium depending on where they feel the most comfortable.