Many of us have seen the nightmarish headlines splashed across our computer screen: “Snake eats pet dog”, “Python swallows family’s pet cat whole” or “Family discovers a python eating a pet cat in their front yard”. You might wonder if something equally horrific could happen in your own home with your pet python and beloved dog.

Will my ball python eat my dog? No, your ball python will not eat your dog. Adult ball pythons reach full-grown lengths of 2-6 feet, which is too small to swallow a cat or dog. These snakes are far more inclined to eat a rat that weighs about half a pound than an eight-pound chihuahua.

Large, wild constrictor snakes have been known to eat family pets, it’s true. While it is highly unlikely that your captive ball python will also make a meal out of your dog or cat given the snake’s size and temperament, you should still keep them separated. Cats, dogs, and reptiles don’t mix well for many reasons and are best kept a safe distance apart. 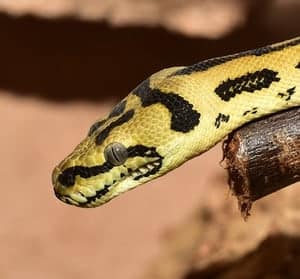 Certain types of snakes can and do attack pets. However, this typically happens with much larger species of snakes, such as Australian scrub pythons, Burmese pythons, boa constrictors, and anacondas. These types of giant constrictors possess a couple traits that make them more apt to make an opportunistic meal out of your furry pet.

First, giant constrictors, true to their name, grow to be very large in size. Sometimes they can reach upwards of 20 feet in length. Their size makes it much easier for them to constrict and swallow a small dog or cat. Second, these species are tolerant of urban and suburban areas. It is a lot more likely that they will dwell in an area where free-ranging cats and dogs can be preyed upon.

Southern Florida in particular is home to several non-native species of giant constrictor snakes. In fact, in April of 2012, a record-breaking Burmese python, measuring 17 feet, 7 inches, was discovered and removed from Everglades National Park.

In September of 2013, a 10-foot wild African rock python took the life of a 60-pound husky right in front of his owners in Miami-Dade County. In this particular case it is unclear as to whether the snake intended to eat the dog or was acting in its own defense, but the dog lost his life nonetheless.

Many species of snakes, including giant constrictors, abound in Australia as well. Australia’s longest python is the amethystine python, or scrub python. These snakes can reach lengths of 9 to 26 feet! They’re notorious for claiming the lives of unsupervised pet dogs and cats.

The best ways to keep your pets safe from giant constrictors is to use common sense. Do not let cats roam outdoors, which is unsafe for a variety of reasons, no matter your location. Keep dogs on a leash when you go for a walk.

This leash should make it easy to control your dog (retractable leashes are not recommended). If you see a snake, keep your dog as far away from it as possible. When you’re hiking with your pet, stay on clear, open paths, away from tall vegetation. Lastly, always supervise your pet when they are out in your yard and prevent them from antagonizing or interfering with wild snakes of any type.

Unlike their giant counterparts, your captive ball python is unlikely to attack and consume your dog or cat.

A ball python’s size makes the consumption of this type of pet nearly impossible. The average ball python will grow to about 3.5 to 4 feet and is fairly slender. The maximum size for a ball python is 6 feet in length, and it isn’t exactly common for them to reach such a size.

Ball python owners actually tout the snake’s preference for smaller prey as one of the benefits of owning them. By the time they are full grown, the largest rodent they’ll happily eat is a 150 gram rat.

Ball pythons are also known for having a pleasant, docile demeanor. True to their name, they are more inclined to roll themselves into a ball when they feel threatened, rather than biting or constricting. They are considered to be good snakes for beginners, as they are calm and easy to handle.

However, none of this means that you should allow your ball python to mingle with your pet dog or cat. Pet owners love to claim that there are exceptions to every rule, but dogs and snakes most likely cannot and will not be friends. You are posing a tremendous risk to your python if you attempt to make this happen, even for a brief photo op.

Ball pythons are a species of snake that is particularly sensitive to stress and feeling insecure. A dog or cat that just won’t stop staring into their enclosure or is trying to nose or paw its way into your snake’s tank can cause a tremendous amount of stress to your reptile.

Your best bet is not only to keep curious cats and dogs out of the room in which your snake is housed, but also to provide several hides for your python that will allow them to feel more secure within their enclosure.

Cats have also been known to eat snakes, rather than the other way around. Even if your cat isn’t interested in making a meal out of your python, their panicked, wriggly movements might appear to be the perfect plaything.

A cat can easily scratch, bite, or otherwise injure a snake. Pet dogs have also been known to bite a snake, and the puncture wounds inflicted by their sharp teeth can prove to be deadly.

Again, the best thing you can do for your ball python is to keep dogs and cats away from them completely. If your four-legged pets are in the same room as your snake, always be sure that you are providing adequate supervision. 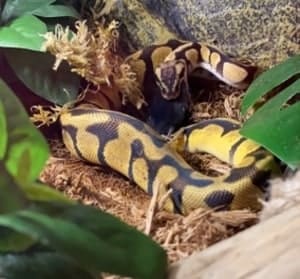 Your ball python isn’t interested in swallowing up your dog or cat, so what do they eat and how often should you feed them?

Ball pythons are carnivorous and need to eat whole animals to receive proper nutrition. Frozen prey is ideal, as it provides all the necessary nutrition, but cannot inflict injury upon a snake like live prey can.

You should give your ball python feeder rodents that are approximately 10-15% of the snake’s body weight. For example, if your ball python weighs 500 grams (about a pound), you would provide frozen rodents weighing 50-75 grams.

Ball pythons will typically eat a variety of prey of various sizes including mice, rats, African soft-furred rats, gerbils, and chicks. A variety of prey equals a variety of nutrition, but not all pythons are happy with a menu that is constantly changing. You’ll just need to figure out what your snake prefers most through some trial and error.

You should thaw and warm any frozen prey to make it more appealing to your python. To do this, move the item from the freezer to your refrigerator the night before you feed your snake. This will allow the rodent to thaw slowly overnight, discouraging bacterial growth.

About 15-30 minutes before you feed the thawed prey to your ball python, place it in a non-BPA plastic bag and submerge it in warm (almost hot) water. This will bring the temperature of the rodent up to about 98 degrees, similar to the average body temperature of most live prey.

Adult ball pythons do not need to eat every day. They’re usually happy with one meal (such as a medium-sized rat or a few smaller mice) every couple weeks. Baby and juvenile ball pythons will need to eat more frequently, so be sure to do your research on the recommended diet for your ball python at every age and size.

You should also speak with your veterinarian about whether your ball python needs a vitamin or nutritional supplement, as this can vary by snake. For example, UVB light exposure isn’t necessary for all snakes, so if you’re not providing this type of light, your snake may need a vitamin D3 supplement.

You should also provide your python with a large bowl of clean water for both soaking and drinking. Tap water is perfectly acceptable.

It is highly unlikely that your ball python will ever attempt to constrict and eat your dog (or cat). In spite of this, snakes and other pets are best kept apart for the safety of all pets in your household. Keep your ball python safe and stress-free by housing him in a room that is entirely separate from any furry, four-legged creature you may own.