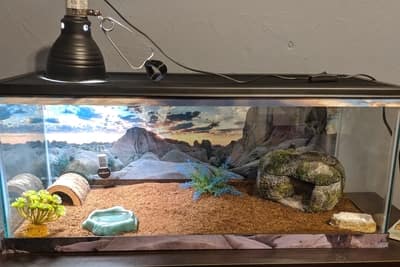 For those of you that don’t know, leopard geckos have very, very amazing senses that have helped them not only survive in captivity but also out in the wild as well.  They have a great sense of hearing, smell, taste, and sight.  Because their senses are so great, it’s probably safe to say that they might be just a little more sensitive as a result as well.  That said, let’s see if it’s actually true.

Are leopard geckos sensitive to light?  Yes, they are.  This sensitivity allows them to take in more light when having to hunt for food and other resources while out in the wild.

Their sensitive eyes aren’t very useful while in captivity because there’s nothing to hunt or look out for aside from the crickets that hop around their small enclosure.  But when hunting under dimly-lit circumstances, such as at night when out in the wild, having sensitive eyes is extremely useful.  If you’d like to learn more information about their eyes, read on as it might be useful.

Owners Should Be Mindful 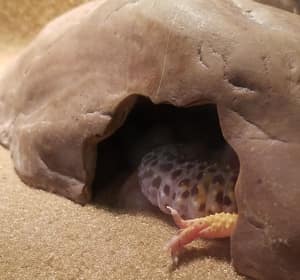 Now that we know that leopard geckos have a sensitivity to light, it’s important that owners are being very mindful when putting lights in the tank as it may be very disturbing for them if there aren’t adequate places for them to hide that provide complete darkness whenever they need to get away from them.

For example, some owners like to grow plants inside their enclosures and because some plants require a lot of bright light in order to grow and stay alive, this can be very disturbing for your leopard gecko if their hides don’t provide enough darkness for them to comfortably rest in complete peace.

Some hides are very good at blocking out light from inside and outside of the tank, but other hides, such as ones that are made out of Tupperware, don’t provide enough coverage at all for them to feel safe.

Tupperware hides are fine when you don’t have extremely bright lights hooked up inside your tank or if the room that they’re enclosed in doesn’t get very bright, but in situations where there’s a UVB light above their heads or when there’s tons of sunshine that casts inside of their tank, you can see where this would bother your leopard gecko.

Not only will all of this light be harsh on their eyes, but it can also stress them out if they’re constantly feeling like they’re being exposed to it.  That said, if you do decide to expose your leopard gecko to a ton of light, make sure that their hides are providing them with complete coverage from it when they need it.

Leopard geckos don’t mind bright lights and will sometimes even come outside of their hides and sleep in it on some occasions, but when they want to get away from it and they can’t, that’s when the stress can start to kick in for them which can then cause further issues aside from just feeling like they’re exposed.

If you don’t have enough hides or the ones that you do have don’t provide a ton of coverage, then I recommend checking these hides out here over on Amazon.

Hides that are made out of Tupperware work just fine but when the light in your tank is much brighter than the natural light that comes into your room every day, It’ll be too overbearing for your leopard gecko to deal with without a completely dark retreat to run in to.

Light Sensitivity Can Sometimes Be Useful in Captivity

You may be wondering why a leopard gecko would need to rely on their sensitive eyesight to hunt while in captivity but because some owners keep their leopard geckos in complete darkness, having the ability to do this is extremely useful for them.

From what I’ve seen, owners that don’t provide their leopard gecko with light don’t have any issues when it comes to their capability to catch their food when it’s time to eat.

But because complete darkness isn’t true to how they live in their natural habitat in the wild, keeping them in a completely dark room can confuse them by not allowing them to know the difference between night and day.

This may not seem like a problem, but unfortunately, it can be.  Not knowing the difference between night and day will not only potentially mess up their sleeping patterns but it, again, might also stress them out as a result as well.

Leopard geckos live simpler and healthier lives when they’re living as true to how their life would be if they were still out in the wild so if you currently have your leopard gecko in a room that’s always extremely dark, consider buying a lamp and leaving it on from about dusk until dawn.

Leopard geckos are active between dawn and dusk, so having a light on while they sleep will trick their little reptilian brains into thinking that it’s daytime when it’s really not.

Some Morphs Are More Sensitive to Light Than Others 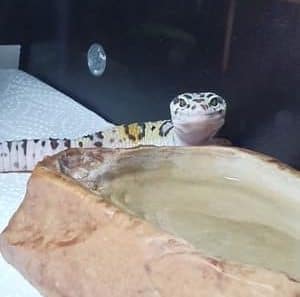 It might sound weird, but surprisingly enough, some morphs are in fact more sensitive to bright lights than other morphs.  To be more specific, albino leopard geckos are a prime example of a morph that is extremely sensitive to the light.

It’s not because they’re lighter in color, but because they lack pigmentation.  And for some reason, a lack of pigmentation makes them more susceptible to having issues with dealing with really bright lights.

Actually, unless you plan on growing plants in your tank, it really doesn’t benefit you to have lights inside of it as you can care for your leopard gecko just fine without them.  With more and more people turning to use heat mats, lights are almost unheard of in the leopard gecko community.

I’m not knocking the usage of lights or anything, I’m just simply stating that unless there’s a reason where lights would be required in your tank, I wouldn’t recommend using them if you absolutely didn’t have to.

Having light in your tank when dealing with breeds that aren’t albino is fine, but for the leopard geckos that are, living in a tank in which there is can be fairly uncomfortable.  Again, I’m not knocking lights as they are a very resourceful way to provide your leopard gecko with the D3 that they need.

But unless you’re in a situation where lights are the only thing that you can use and getting a UTH isn’t an option, I would highly recommend going with a UTH instead.

If you’re not growing plants, then I recommend you check out this heat mat here over on Amazon.

In the wild, leopard geckos soak all of their heat up with their stomachs by laying on warm rocks that have been exposed to the sun throughout the day.  So if anything, heat mats are more natural than lights are if your goal is to stay true to their natural environment as much as possible.

Whether you decide to use lights or a heat mat though, each method of warming up your tank or providing them with D3 will work just fine.

Lights are completely fine to use if that’s the way you’d like to provide your leopard gecko with what they need in order to survive, but because leopard geckos do have very sensitive eyes, it might be easier to go with a heat mat instead.

I’ve been apart of the reptile community for quite some time and the more and more time passes, it seems that more people are leaning towards using UTH’s.  Not only do you not have to worry about disturbing your leopard gecko when using one, but you’re also staying true to how their natural environment is really supposed to be.

Some people think that UVB lights mimic the sun, but because leopard geckos are asleep most of the time when the sun is out, a UVB light really doesn’t provide any extra benefit aside from making it easier for your leopard gecko to keep a consistent sleeping pattern in rooms that don’t have very much light.

If your room gets sunlight, which most rooms do, then I think a heat mat will be a much better option to go with not only for safety reasons but for simplicity reasons as well.  It’s easy to hook up a thermostat and easily regulate temperatures when you have a heat mat, but with lights, it can be a little more difficult.