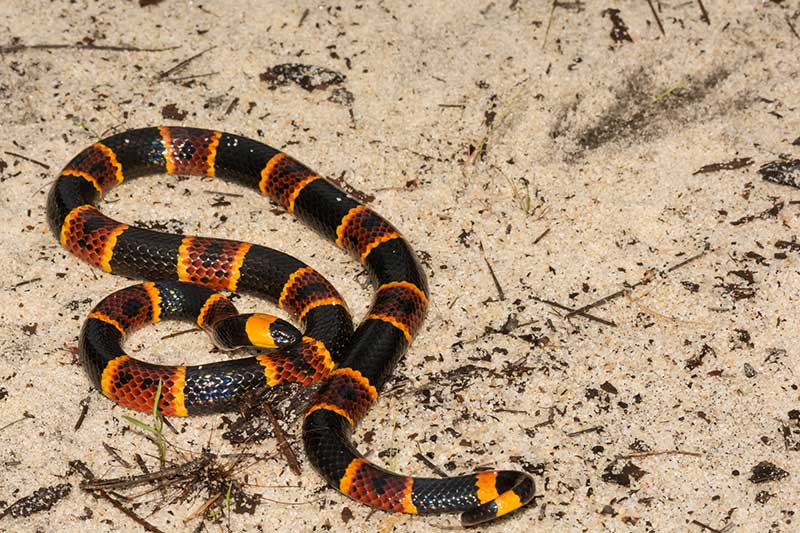 Coral Snakes are very small, brightly colored snakes and are extremely venomous. They range from 18 to 24 inches in size and are typically as skinny as a pen. They are typically broken into two different categories: old world (those from Asia) and new world (those from the Americas). There are 16 species of old-world coral snakes and over 65 new-world coral snakes. While Florida is home to some of the diverse wildlife in the country, when it comes to coral snakes in Florida, you’ll only find one species.

The species of coral snakes in Florida

The only known coral snake living in Florida is the Eastern Coral Snake (Micrurus fulvius). The snake is extremely venomous and should be avoided if sighted.

In this article, we will take a look at the physical description, habitat, and diet of the snakes.

The eastern coral snake, sometimes known as the harlequin or common coral snake, have very distinct and bright coloring. Its body consists of black, yellow, and red rings where only the red and yellow rings touch. Their scales are small and smooth.

Once fully grown, the eastern coral snake can range anywhere from 18 to 30 inches. However, the largest known Eastern Coral Snake reached four feet in length. Like most coral snakes, the width of their body is pencil-thin.

The snake’s head is small with a rounded black snout. They have a broad yellow band behind their eyes. Additionally, they have two small fangs.

What is the Range and Habitat of the Eastern Coral Snake in Florida?

Eastern coral snakes are found in every county of mainland families. In addition, they can be found in Key Largo and some of the Northern Keys.

Eastern coral snakes thrive in a wide variety of habitats. Primarily they prefer coastal plains, but they have been found in dry woodlands and will even travel inland to seasonally flooded areas. They have even been known to inhabit residential areas.

The snakes are extremely secretive and live mostly underground. If they are found above ground, they can be seen crawling on the ground, hiding in shrubs or underneath debris. They rarely climb trees but have been seen inside trunks of oak trees.

Eastern coral snakes have the second strongest venom of any snake (the black mamba has the most). However, due to their poor venom delivery system, they are considered less dangerous than many other venomous snakes.

Despite their venom delivery system being poor, a bite from an Eastern Coral Snake should be taken extremely seriously.

Due to their secretive and tentative nature, bites from eastern coral snakes are extremely rare. They will not attack unless they are provoked or feel threatened. You can tell that the snake feels threatened when it elevates and curls the tip of its tail. It may even release a gas from its cloaca.

What do Eastern Coral Snake Feed On?

Similar to kingsnakes, eastern coral snakes almost exclusively eat lizards and smaller snakes. However, they have been known to eat frogs as well. They hunt prey by slowly crawling on the ground and envenoming their prey to kill them.

Interestingly, eastern coral snakes are diurnal meaning that they are active during the day. They tend to hunt at dusk and dawn when the temperatures are coolest.

There are two snakes that are often confused with the eastern coral snake due to their similar appearance. The snakes are the scarlet kingsnake (Lampropeltis ellipsoids) and the scarlet snake (Cemophora coccinea). Both snakes are nonvenomous and relatively harmless.

You may also like: Meet the only coral snake in Texas

Coral snakes are rare to see and even rarer to get bitten by. There hasn’t been a reported death from a coral snake bite since the 60s.

There was only one company making coral snake anti-venom and because bites were so rare, the quit making the anti-venom in 2003. There is still some in circulation however, so various hospitals may still carry it. Just try not to get bitten by a coral snake.

4. Coral snakes are the only venomous snakes in the U.S. that lay eggs

All other venomous snakes in the United States are pit vipers and give birth to live young, only coral snakes lay eggs.