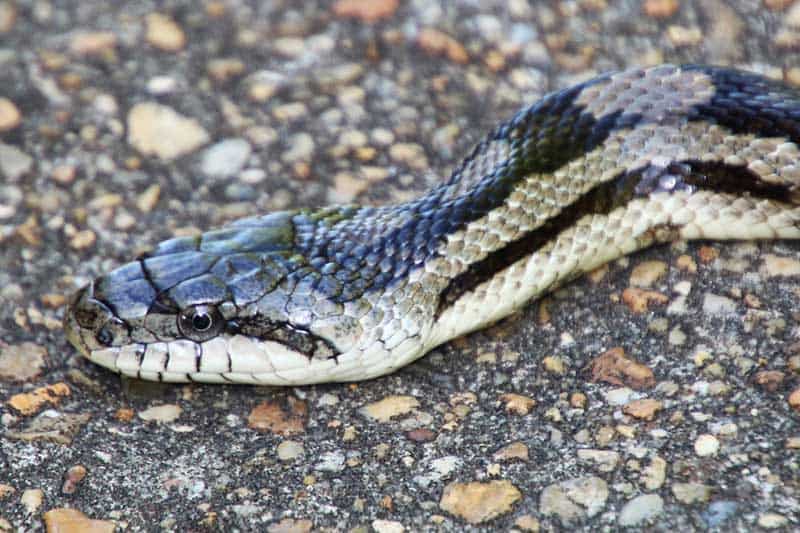 There are as many as 5 different species and subspecies of rat snakes in South Carolina, and each one has its own distinct colors and habitats. Aside from being residents to South Carolina and other U.S. states, rat snakes are popular in the exotic pet trade. They’re nonvenomous, have simple care needs, and have a docile personality. Similar to many other types of snakes, rat snakes kill by constriction and are not a threat to humans. They have ways to appear more dangerous, but it’s all for show. In this article we’ll learn about South Carolina’s rat snakes as well as look at some pictures of them.

The 5 Different Species of Rat Snakes in South Carolina

Having said that, the 5 species of rat snakes in South Carolina are the black rat snake, yellow rat snake, eastern rat snake, gray rat snake, and the red rat snake (aka corn snake).

The Eastern rat snake lives exclusively in the US along the southeastern coastal plain, southern Georgia, and Florida. Eastern South Carolina along the coastal plain is within their range. They are completely black on the back and sides, making them almost identical in appearance to a black rat snake. Eastern rat snakes have small keels on their scales, a white underbelly near their chin, and irregular black spots that turn solid gray near their tail.

Gray rat snakes are most common in western South Carolina. People sometimes refer to them as “chicken snakes.” Animal control companies have reported gray rat snakes like to hide out in attics where it is warm and has rodents or birds.

Another name people call the red rat snake is the corn snake, which is one of the most popular pet snakes there are. They are one of South Carolina’s smaller rat snake species, ranging from 1.5 to 3 feet in length. You can normally find them living in barns or other manmade structures.

The yellow rat snake is most common in the peninsula of Florida, but their range extends north along the coastal plain into Southern Georgia, South Carolina and North Carolina. This variety has a medium-yellow color that can also be orange-yellow and may have very light stripes. The babies are gray with darker blotches. They are semi-arboreal and can live much of their time in trees. They can often be found in live oaks and magnolia trees.

The yellow variety can interbreed with the black variety, and this leads to offspring that are green. They tend to freeze when they see danger, and this leads to many of them being killed on the road. They are relatively slow snakes that can easily be caught and kept as a pet for their beautiful coloring.

When this snake is disturbed, it will rapidly shake its tail. If there are dry leaves around, this allows the sound to be mistaken for the rattle of a rattlesnake. This species tends to be solitary until it’s time to mate.

One of the most common species of rat snakes in the US, the black rat snake, is commonly found in western South Carolina. Black rat snakes are shiny black in color with a white belly and faint hints of white between some scales. Although people interchangeably call western and eastern rat snakes black rat snakes, they are slightly different genetically and in color.

The black rat snake is also one of the largest rat snakes in North America, being able to grow up to 6 feet in size. During the colder months, black rat snakes will brumate, which is similar to hibernating. During brumation, the snakes are sleeping but still awake for activities such as drinking water.