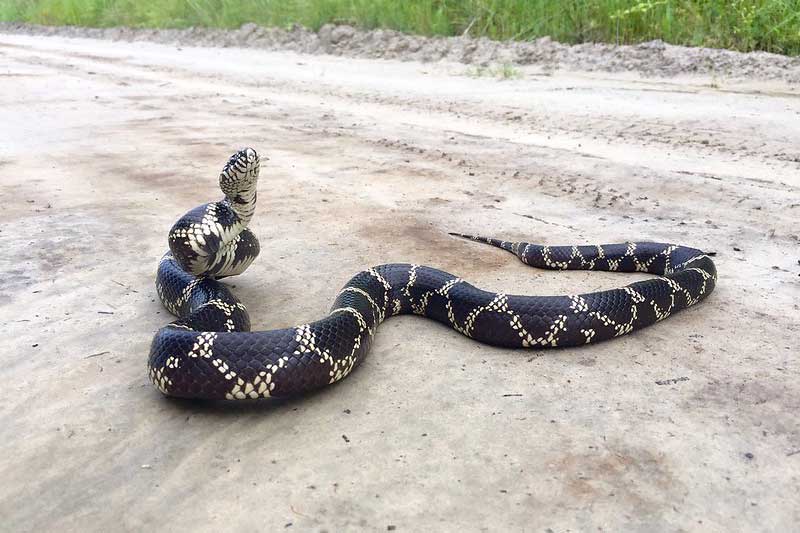 There are many types of snakes in the state, but only a few types of Kingsnakes in South Carolina. They get their name because they are known to prey on other snakes, kingsnakes are snake eaters. They’re seldom seen, are rather elusive, and like to hide under rocks, logs, and other debris.

With all that being said, let’s look at some of the kingsnakes of South Carolina.

4 Types of kingsnakes in South Carolina

The eastern kingsnake can be found in all areas in the state of South Carolina. They can grow up to 36 to 48 inches in total length and are characterized by having shiny, black, smooth scales. These kingsnakes have white or yellow chain link bands that cross the back and connect on the sides. They have a short, stout head and small beady eyes.

Eastern kingsnakes lay clutches of 4-20 eggs which hatch in about 60 days. The juveniles emerge fully formed and are brightly colored. Kingsnakes eat other snakes, lizards, frogs, rodents, birds, and they especially like turtle eggs. Many types of kingsnakes, like the eastern kingsnake, can be found in hardwood and pine forests, swamps, hammocks, tidal wetlands, farmlands, and urban areas.

The mole kingsnake is a subspecies of the eastern kingsnake. It grows 30-40 inches in total. They have very smooth scales and are a light or dark brown with reddish brown spots down the back.

They mate in late spring or early summer, laying a clutch of 10 to 12 eggs. Like other kingsnakes, they eat a variety of animals like rodents, other smaller snakes, lizards, amphibians, and birds. They spend much of their time underground and aren’t seen very often. They like to hide under boards or natural debris of open fields or edges of forests.

The scarlet kingsnake is also known as the scarlet milk snake and the scarlet snake. It can be found in sandhill regions of the lower coastal plain of South Carolina. It grows 14 to 20 inches long. Its bright red, yellow, and black markings make it one of the most beautiful snakes in South Carolina. Juveniles look the same as adults.

Scarlet kingsnakes are frequently mistaken for the extremely venomous coral snake or the non-venomous scarlet snake. It can be distinguished from the coral snake by the famous rhyme, “Red on yellow, kill a fellow. Red on black, friend to Jack.”

They breed from March to June and will lay 2 to 9 eggs. The babies emerge after two months after being laid. They hunt mostly during the night and eat small lizards, rodents, and other snakes. Scarlet kingsnake can burrow if they need to and they can climb very well.

The eastern milk snake is also called the adder, the checkered adder, the common milk snake, and the chicken snake. It grows 24 to 36 inches in total length. It lives in the mountain forests of South Carolina.

They have smooth shiny scales with black-bordered brown markings on a tan or gray background. The newly-hatched look identical to the fully-grown adults, though are much brighter.

The eastern milk snake breeds in early spring and lays 2 to 17 eggs that hatch in 28 to 39 days. Milk snakes are hardly ever seen during the day and prefer to hide under logs during the heat of the day.

They hunt at night and prey upon other, smaller snakes, snake eggs, rodents, birds, bird eggs, and lizards. They’ve even been known to kill and eat raccoons. They kill their prey by suffocating them and then swallowing them whole. They like to live in forests, either coniferous or deciduous, but can also be found in wet or dry prairies, grasslands, rocky hillsides, small streams, and marshes.

Milk snakes get their name from an old folk tale that describes a snake sneaking into a barn and drinking the milk from nursing cows.