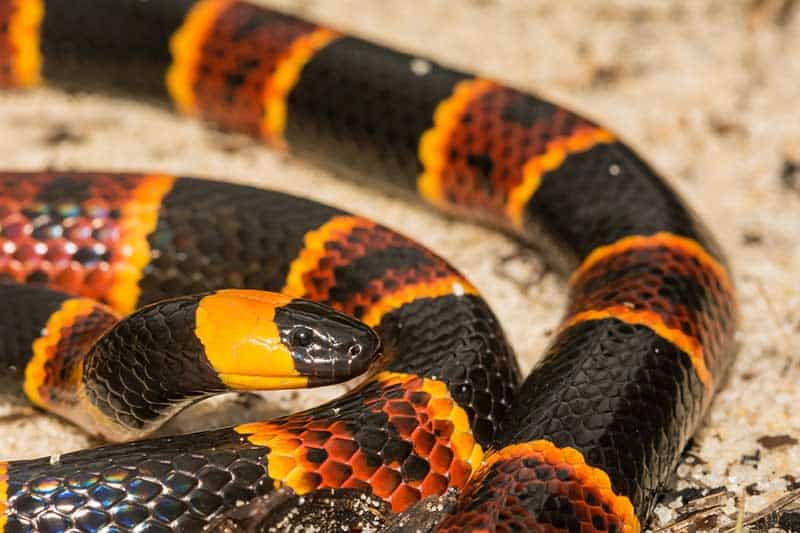 Coral Snakes are very small, brightly colored snakes and are extremely venomous. They range from 18 to 24 inches in size and are typically as skinny as a pen. They are typically broken into two different categories: old world (those from Asia) and new world (those from the Americas). There are 16 species of old-world coral snakes and over 65 new-world coral snakes. While Texas is host to a wide variety of snakes, there is only one known species of coral snake in Texas.

The only known species of coral snake living in Texas is the Texas coral snake, otherwise known as Micrurus tener.

This snake is venomous and should be treated with great caution. In this article, we will take a look at the physical description, habitat, and diet of these elusive yet beautiful animals.

The Texas coral snake has bright red, black, and yellow rings like most coral snakes. The red rings only touch adjacent yellow rings. There are no red bands found on the head or the tail. It has smooth dorsal scales.

The Texas coral snake is a little bit longer and stouter than its eastern counterpart. The Texas coral snake can grow up to 48 inches in length but typically averages 24 inches. Males are usually larger than females. Its head is rounded with eyes that have round pupils. They have two 1/8th inch fangs.

What is the Range and Habitat of the Texas Coral Snake?

In Texas, the Texas coral snake is found in Southern and Eastern Texas. They can be found in the shrubland as well as the woodlands. More specifically, they are found in the South and the Trans-Pecos in the East.

Texas coral snakes live in a wide variety of habitats. They spend most of their time underground. However, when they are above ground they prefer moist vegetation and humid areas. They also can be found in densely wooded areas and like to live in rotting wood. They can also be found hiding in piles of debris in suburban areas.

The snakes are mostly found above ground after periods of heavy rain or when nighttime temperatures go above 78°.

Is the Texas Coral Snake Venomous?

The Texas coral snake is extremely venomous. It has a powerful neurotoxin that can cause neuromuscular dysfunction.

Getting bit by a Texas coral snake is extremely rare. The snakes are very tentative creatures and will not attack unless provoked. You can tell that the snake feels threatened when it elevates and curls the tip of its tail. It may even release gas from its cloaca.

What do Texas Coral Snakes Eat?

Texas coral snakes are carnivores and typically eat earth snakes and fossorial species. They have been known to occasionally eat lizards and rodents. They kill their prey by envenoming them before eating them.

Two snakes are often confused with the Texas coral snake due to their similar appearance. The snakes are the scarlet kingsnake (Lampropeltis ellipsoids) and the scarlet snake (Cemophora coccinea). Both snakes are nonvenomous and relatively harmless.

Because Texas coral snakes are in the Elapidae family, they are related to both king cobras and black mambas which are 2 of the most venomous snakes in the world.

2. Coral snakes are widely distributed, but rare to see in Texas

Texas coral snakes have a range throughout most of Central and South Texas, but are shy and elusive snakes that stay hidden most of the time. Texas residents and visitors don’t see them as often as other types of snakes.

3. The Texas coral snake is the only brightly colored venomous snake in Texas

All other venomous snakes in Texas are a duller, gray or brown color. Texas coral snakes can quickly be recognized by their red, yellow, and black bands in that order.

4. There are 3 species of coral snakes in the United States