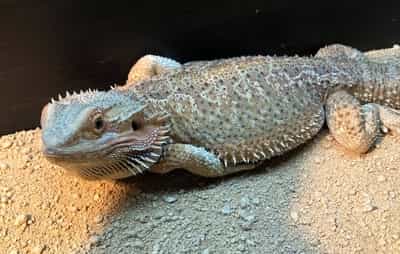 Although most people are familiar with the concept of hibernation, brumation comes as a surprise to many bearded dragon owners! You may be wondering what kind of behavior is normal during brumation. For example, is it normal for your beardie to keep its eyes open while brumating?

Read on to find out more about bearded dragons that brumate with their eyes open, as well as some general information about brumation. Plus, you won’t want to miss our tips for bearded dragon care during the brumation period!

Can Bearded Dragons Brumate With Their Eyes Open?

Every bearded dragon behaves differently during brumation. While some beardies will sleep throughout the entire brumation period, others may take long naps, occasionally waking up and opening their eyes. Some bearded dragon owners report that their pets go into a state of “partial brumation,” where they hangout in their hides without moving but remain awake.

It will take a couple of brumation periods for you to begin picking up on your bearded dragon’s habits. Just remember that no bearded dragon is the same, and what’s normal for one beardie may not be normal for your pet. 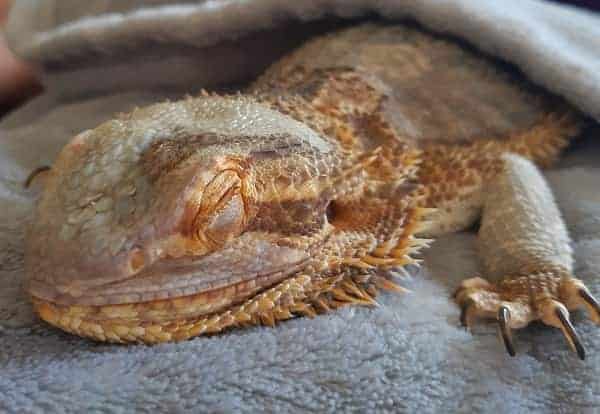 Everyone is familiar with the idea of hibernation in mammals, and brumation is basically the reptile equivalent. However, bearded dragons don’t completely shut down during brumation the way that mammals do during hibernation.

Instead, they go dormant. During brumation, you’ll notice that your pet doesn’t eat, drink, move, or go to the bathroom as frequently as it usually does. It may not do any of these things at all! Another typical brumation habit is to hunker down underneath substrate or in the hide on the cool side of their enclosure.

Do All Bearded Dragons Brumate?

Nope, not all bearded dragons brumate! Each beardie is an individual, and while some may brumate every single year, others may never brumate. Your bearded dragon’s instincts will tell it whether or not to brumate, so don’t worry too much either way. Male and female bearded dragons both brumate, and typically males emerge from brumation first.

Should I Try to Keep My Bearded Dragon From Brumating?

In most cases, the answer is no, you shouldn’t try to stop your beardie from brumating. The majority of the time, you should allow your pet to follow its instincts. However, there are two exceptions. The first is if your bearded dragon isn’t healthy enough to survive brumation.

The second situation is if your bearded dragon is a baby. Bearded dragons typically don’t begin brumating until they’re at least one year old, but some do brumate before hitting this age. There’s quite a bit of controversy among bearded dragon owners regarding whether baby beardies should be allowed to brumate.

This is because many owners worry that baby bearded dragons don’t have the resources to survive for up to a few months without taking in many nutrients. There are a couple of methods to prevent brumation, such as extra handling and increasing lighting in your pet’s enclosure.

It’s important to get in touch with a veterinarian if you want to prevent brumation. They can give you advice on whether or not that’s the right decision for your pet.

How Long Does Brumation Last?

Brumation varies for each and every bearded dragon! It can last for days, weeks, or even months. Your pet may wake up every once in a while to eat, or it might remain asleep the entire time.

While we usually think of brumation as a winter activity, bearded dragons are actually capable of brumating at any time during the year. It’s definitely most common in the fall and winter months when the weather gets cooler, but there’s no reason to be alarmed if your beardie brumates during the spring or summer.

Why Do Bearded Dragons Brumate?

In their natural habitat, bearded dragons brumate so that they can get through the cool fall and winter months–and the lack of food that comes with that time of year.

During the colder months of the year, insects disappear and plants die, so bearded dragons don’t have access to the foods that normally make up their diet. So they hunker down until the weather warms up and their food sources return in the spring.

Even though your beardie lives in captivity, that doesn’t erase the thousands of years of natural instincts that were passed down to it. Your bearded dragon has a “biological clock” of sorts that tells it when it’s time to brumate and conserve energy during cooler seasons. 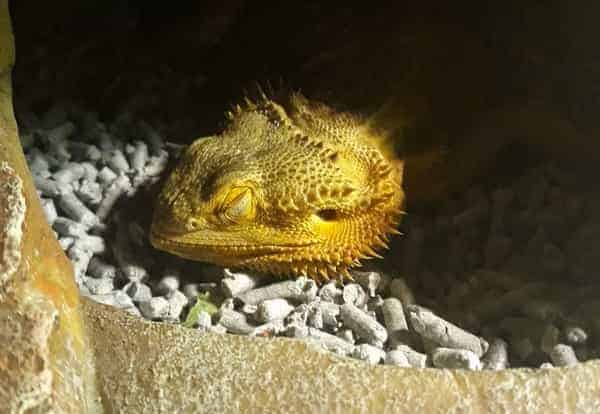 What Are the Signs That My Bearded Dragon Is Getting Ready to Brumate?

One thing that’s important to keep in mind is that bearded dragons typically show more behavioral changes than physical changes when they’re about to brumate. Here are some common behaviors you might see in a healthy bearded dragon getting ready for brumation.

How Should I Care for My Bearded Dragon During Brumation?

Think your pet is getting ready to brumate? First, make sure that your beardie isn’t sick. Check for impaction, parasites, stress, and proper enclosure conditions. The best way to do this is to take a quick trip to the reptile vet. The vet will be able to ensure that your bearded dragon is healthy enough to brumate, and that it doesn’t have any underlying illnesses.

Even if your bearded dragon doesn’t seem like it needs to eat or drink, you should always keep a fresh bowl of water in its enclosure during brumation. Once a week, offer your beardie some greens. It’s totally fine if your pet doesn’t eat them, but be sure to offer them up anyway.

Keep in mind that if your bearded dragon eats during brumation, you’ll need to wake it up every day to bask and/or soak in warm water until it defecates. If it doesn’t, the food could actually rot inside of your pet’s stomach while it brumates and cause all sorts of health issues!

It’s very common for bearded dragons’ skin to dry out quite a bit during brumation. But you can help your pet stay hydrated and healthy by soaking it in warm water on a weekly basis. Your beardie might not wake up while soaking, and that’s absolutely fine!

Fill your bathtub or a plastic storage tub up to the height of your pet’s shoulders with warm water, and let it soak for 20-30 minutes. Then dry it gently with a towel and set your pet in its basking area so that it can fully dry off before returning it to its hide. 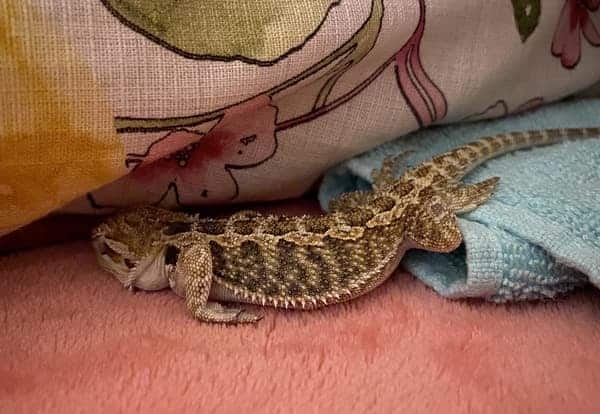 During brumation, try to avoid handling your bearded dragon as much as possible. When you take your beardie out of its enclosure for weekly soaks, you can multitask and monitor its weight at the same time.

Your bearded dragon actually shouldn’t lose any weight during the brumation period. If it does, be sure to get in contact with the vet to make sure your beardie doesn’t have any underlying health issues.

Is My Bearded Dragon Brumating or Dead?

Sometimes it can be hard to tell whether your bearded dragon is simply brumating, or if it’s passed away. A brumating bearded dragon might be limp, and it might not be responsive to you. But a dead bearded dragon will be stiff and begin to fade in color. It may also have droopy or sunken eyes and a gaping mouth.

Always make sure your pet has access to water, and offer greens once a week. Soak your beardie weekly to keep it hydrated, and make sure to weigh it at that time as well. If you follow these guidelines, your beardie is sure to stay healthy throughout the brumation period!