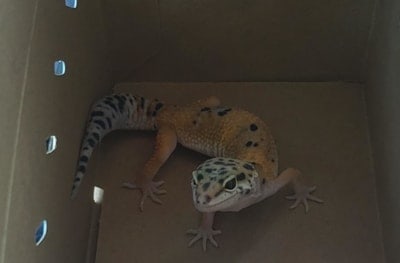 When it comes to the scariest things that could ever happen to a leopard gecko owner, this takes the cake.  Waking up or coming home to an empty tank is by far the most gut wrenching thing any loving owner could go through and to make matters worse, they don’t make it easy on us to find them either.  That said, here are some tips for finding a lost leopard gecko.

More on how to find a lost leopard gecko

Because leopard geckos like to be hidden, in the dark, and warm, checking for them in places where you’d least expect them to be in might be the very same places where they’re actually most likely to show up.  Considering they haven’t wandered outside, if you search hard enough, eventually, they should show up within time.  That said, here is some more information that may help. 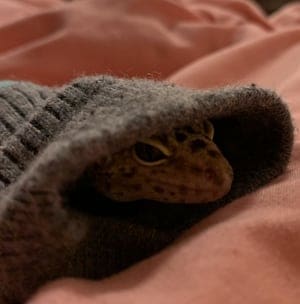 Before you worry or completely throw in the towel altogether about finding your leopard gecko you should first realize that even though they’re free, they’re not lizards that just like to freely roam around as this makes them feel unsafe and vulnerable to potential predators that may be out to get them.

In order to ever have a chance at finding them, you’ll want to think like they do.  That means you’ll need to start checking in the most unexpected places within your room and then working your way out into other parts of the house as well.

Checking in places such as under your bed, dresser, fridge, or by furnaces are just a few examples of where you might expect to see them at.  While in their tanks, leopard geckos like to hide, they love the warmth, and they love moving around a lot.

So while they’re out and about, this is the same type of behavior that you can expect from them in situations like these as well.

They’ll stealthily move from place to place when nobody is watching, they’ll find a source of heat for digesting any spiders or ants that they may have picked up along the way while roaming in these tight and unfrequented spots, and a lot of the times, they won’t make a move until it’s dark out.

If you didn’t know, leopard geckos are animals that are most active between around 8:00 P.M. to 6 A.M., so if you plan on doing your search between these hours you might just get lucky and spot them moving around but because these are the times where they’ll be the most alert, it might be a little harder to catch them.

In order to get around that, you’ll want to search for them while they’re asleep when they’re less aware of their surroundings so that you can catch them off guard.  Leopard geckos have a great sense of hearing and smell, so if they’re up and they sense you coming, it’s most likely that they will flee away and flee away fast depending on the leopard gecko.

All in all, just remember to check in spots that favor the conditions of their tank and the chances of you finding them sooner than later will be a lot higher.

Out of desperation, it may be tempting to use store-bought traps in order to catch your leopard gecko but because most of these traps are meant for permanently getting rid of certain rodents, using one on your leopard gecko probably isn’t the best idea.

A common trap that comes to mind is the glue trap.  The reason I bring this specific trap up is because after doing a little digging on this topic, I found that someone suggested another owner use a glue trap and honestly, I’m hoping that the owner that was given the advice didn’t end up actually following through with it seeing as using these traps aren’t safe even if they don’t exterminate the animal that’s caught on them.

The reason they’re especially unsafe for leopard geckos is because the glue that is used on those traps is very strong and because leopard geckos have very fragile legs, feet, and toes, breaking a bone or severely injuring them in the process of getting them off of the trap is very likely to occur.

Not only that, but leopard geckos are animals that are easily stressed.  So if they’re out of their tanks and they have a glue trap stuck to their feet, it’s only a matter of time before their stress causes their immune systems to weaken and as a result, make the whole situation of losing them that much more worse than it already is.

Most traps that are bought from the store are dangerous and definitely aren’t meant for catching reptiles so if this is something that’s been suggested to you or if it’s crossed your mind, then please don’t do it.

You’ll be putting your leopard gecko in a lot more harm than they already think they’re in from not being in their tank’s.

Don’t Allow Pets in the Room 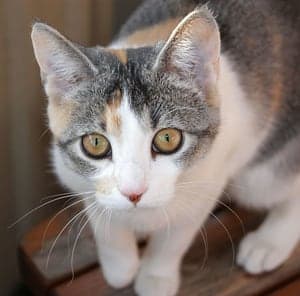 If by chance you’ve just recently lost your gecko and you believe there’s a possibility that they’re still in the room that you’ve lost them in, then be sure to cover any large openings that they may be able to escape from and don’t allow any other pets in.

Commonly owned pets such as cats and dogs are great at detecting other pets because of their amazing sense of smell and hearing, but because both these animals generally see smaller animals as prey, it’s best not to take the risk in allowing them in the room.

Cats and dogs can inflict serious damage to your gecko and could even potentially take their life so before your leopard gecko is found, I highly suggest keeping them out.

You can either do this by keeping an eye on your pet to make sure they don’t run in when you open your door, shut and cover the bottom of your door each time you’re away from home or just lounging around the house, or by getting a pet gate.

If you’re interested in going with the pet gate option, then I recommend checking out this one here from Amazon.  It can adjust to various different widths and it has a door built into it so that you won’t have to climb over it every time you want to enter or exit the room.

If the room that your leopard gecko is in has a door on it then all you’ll need to do is keep your door shut and cover the bottom of it with an old piece of clothing or towel if there’s an open space on the bottom of it.  But if the room doesn’t have a door on it, then having one of these will help out a ton with keeping them out.

The only problem is that because leopard geckos are so small, they may be able to crawl through the openings that are in the gate and because of that, you might have to put something solid and sturdy up on the bottom of it so that they don’t end up escaping.

Yes, pet gates are great at keeping animals out, but the only downside to them is that they can work both ways in situations like these where your leopard gecko has escaped and because of that, you’ll have to take extra measures in ensuring that they don’t get out because of how small they are.

In addition to that, you’ll also want to cover up any reasonably sized openings along the wall and keep windows shut as well.  Leopard geckos are surprisingly good at squeezing through tight spaces and climbing out of places you’d think they’d never be able to climb out of, so by doing this, you’re ensuring even more that you’re keeping your leopard gecko trapped in that one room.

If leopard geckos can escape from a tank one time, they can definitely do it again.  In order to prevent that from happening once you find them, you’ll want to make sure that everything is tight and secure before putting them back in.

Do this by checking any vents that may be loose, removing any overly tall decorations that allow your gecko access to the top of the tank, and anything else that you feel might be a potential escape route for your gecko.

For extra security, I suggest getting a tank that locks and opens up from the front and clipping the sides of your tank’s lid down as well so that they’ll no longer be able to escape.  If you’d like to know where to get a tank like that, then check it out here on Amazon.

It’s the tank that I currently use and the security that it provides is better than any other tank that I’ve ever owned.  As for the lid locks, I recommend these here.  Those will lock the lid in place so that it can’t be pushed on and with the tank that I mentioned above, you won’t ever have to open the top again.

Losing a leopard gecko is very unfortunate but if you follow the advice given above, I have no doubt that you’ll find them in no time.  Check every place you can very thoroughly and recheck spots where you feel they might frequent.

These places will include anywhere that’s warm, dark, covered, and not used very often.