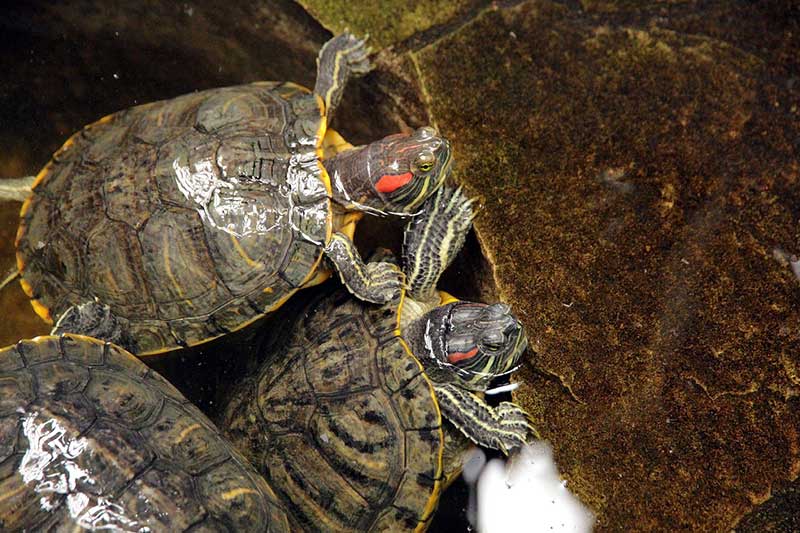 Florida is home to many turtle species. Sea turtles, snapping turtles, and terrapins get all the glory, but there are also many species of semi-aquatic freshwater turtles in Florida. Like the lizards and snakes found in the state, many of Florida’s turtles are not native, but they still thrive in the warm, humid climate.

Here are some of the most interesting Florida turtle species.

13 Species of Freshwater Turtles in Florida

One of the most widespread turtles in North America, this turtle is actually not native to Florida. It’s been introduced here, though, and it’s now widespread. Most likely they were introduced in Florida when pet owners released their pets into the wild after deciding they could no longer care for them.

These turtles are omnivores, eating both plants and animals. They seem to especially enjoy eating dragonfly larvae and crayfish.

Common throughout northern and central Florida, the spotted turtle is a small (less than five inches long) animal with a deep black shell marked by yellow spots.

You’ll find them in swamps, marshes, woodland streams, and even wet pastures. They’re quite active hunters, chasing down worms, slugs, milipedes, spiders, crayfish, salamanders, and more. They also eat aquatic vegetation and fish. They almost always eat their food in the water.

Named for the taste of their meat, which was once very popular, these turtles are uncommon now as a result of overhunting. Found throughout Florida, they can be easily confused with painted turtles, but their coloration is more yellow than red and the distinct net pattern on their shell makes them identifiable.

Like most turtles, they’re omnivores and will eat pretty much whatever they can catch. They like to live in shallow ponds, lakes, and Cypress swamps.

These rare turtles are found in the panhandle, and they exhibit some of the most extreme sexual dimorphism of any turtle. Males almost never exceed five inches in length, while females routinely grow to over twelve inches long.

They have yellow markings on blackish green skin, with dark olive green shells.

Native to the Midwest, Texas and Louisiana, the False Map Turtle has been introduced to Florida as a result of the pet trade. These turtles are strong swimmers and prefer to live in flowing water; you’ll almost never find them in lakes or ponds.

They have mostly monotone colors in a greenish black, with two yellow patches on the back of the head.

Found in central-west Florida, the eastern river cooter is a widespread species throughout the southeastern United States. You can spot them basking on logs and rocks near the water during the day.

It has a mottled brown, tan and yellow coloration, darker towards the back and paler on the belly. They swim faster than you’d think a turtle could move, and have a very diverse diet. They’ll eat pretty much anything, alive or dead, that they can get into their mouths.

A subspecies of the river cooter that can be found throughout the state, these turtles are common enough that they’re probably what most Floridians think of when they think of turtles.

You could easily confuse this turtle with the red-eared slider. The key differences in appearance are that this turtle doesn’t have a red patch behind the ear, it’s all yellow. Instead, they have red stripes along their back, and their plastron (belly) is red, too.

They are mainly herbivorous, and have often been seen laying their eggs in the same nests as alligators. They can happily live in almost any aquatic habitat.

Although it’s undoubtedly the most famous and easily recognizable species of turtle in North America, the Red Eared Slider is actually not native to Florida. It’s scattered in small numbers throughout the state as a result of it’s popularity in the pet trade.

This turtle is the world’s most commonly traded reptile, because they’re cheap and easy to care for. Still, escapes happen and sometimes people grow tired of caring for them (they can live up to 30 years), and simply release them into the wild.

These turtles look a lot like their close cousin the red-eared slider, but without the red markings behind the ear. These turtles are actually native to Florida,where they’re most common in the northern half of the state.

Slow moving rivers, swamps and marshes are their favorite habitats, where they feed on aquatic plants, fish and insects.

The striped mud turtle is a tiny turtle that can be found throughout the state, but as it rarely exceeds four inches, it can be hard to spot. They live in any kind of freshwater environment, but also spend plenty of time on land. Insects, snails, fish and algae make up most of it’s diet. It has a light brown carapace with three light colored stripes running down it’s back.

A subspecies of the river cooter that lives mainly in the Suwannee River, this species was once hunted extensively for it’s meat, and it’s now illegal to kill one.