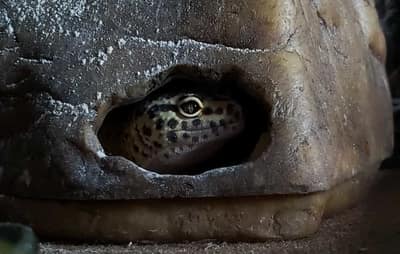 Pooping is a normal part of life and is crucial for getting rid of bacteria and waste the body doesn’t want. That goes for almost every creature on earth, including leopard geckos. A new leopard gecko owner may even wonder, “how often do leopard geckos poop?”. Obviously you want to make sure that everything is functioning as it should in that area for your new pet. So in this article we’re going to answer that question, and discuss some other helpful info you should know about.

So with that said, let’s get right into the question at hand.

How often do leopard geckos poop?

You can typically expect to see a leopard gecko poop anywhere from once a day to once a week. How much they are fed will play a huge factor in exactly how much they defecate.

I wish there were a cut and dry answer for how much each leopard gecko poops, but the fact of the matter is that each one is different, and determining how much each one does it is almost impossible because they all digest food differently and all have different diets as well.  But, if you’d like a better estimate of how much they should be going by age, then I suggest reading on.

Taking into Consideration How Old They Are

As stated above, how much they eat and how quickly they process their food will be two of the main factors to think about when taking into consideration how often your leopard gecko should be pooping, but to give you a better idea than what I’ve already provided, I suggest taking a look at this chart here so that you can know how much your leopard gecko should be using the restroom just by looking at their age and feeding schedule.

Again, these are rough estimates because not every leopard gecko eats and poops the same, but this is kind of what you can expect from leopard geckos of all ages.  It’s not that they poop less as they get older because of digestive reasons, but the more they grow, the less you will likely find yourself feeding them and because of this, there will be less pooping going on.

Baby leopard geckos eat a lot more than juveniles and adults because they need the food in order to grow, so as a result, they’re naturally prone to poop more as well.  The more they eat, the more they poop.  It’s simple.

4 things to check if your leopard gecko isn’t pooping

All leopard geckos should be pooping on a pretty regular basis depending on how much they’ve eaten, but if yours isn’t, then there may be something going on that you don’t know about.

Whenever this happens, the first thing you’ll want to look at is the type of substrate you have in the tank because if it’s a kind they shouldn’t be on, your leopard gecko could be impacted.

To give you an idea of what type of substrates could cause impaction, check out this short list here. You may recognize them:

It’s very rare that a healthy leopard gecko turns down a meal unless they’re ill with something. So if yours isn’t eating, checking your substrate is the very first thing you’ll want to do as not pooping is a lot of the times the result of an impacted leopard gecko.

If you think that your leopard gecko may have consumed one of the substrates that I’ve listed, then click here to go to this article that I wrote and follow the steps that I’ve given to relieve their symptoms and clear up their digestive system.

Also whenever this happens, get them out of the tank immediately and get their substrate changed out with something much safer, such coconut fiber.

If you don’t suspect that impaction is the cause, then next you’ll want to check your tanks temperatures.  Believe or not, if it’s too cold within your tank, your leopard gecko will not eat or poop.  It’s hard for their digestive tract to work properly if their body temperature isn’t warm enough, so until it warms back up, they will not do either as it will be too much of a strain on their bodies.

If you believe this may potentially be the issue your leopard gecko is facing, I recommend taking a look at this article here regarding pretty much everything to do with their temperature. That article will make sure that you’re tracking, regulating, and just overall doing everything necessary to ensure optimal digestion and health.

The last reason they’re not pooping is stress.  It may not make much sense, but stress causes a leopard geckos body to not function properly in many different ways.  It can cause them to lose sleep, be more aggressive, and even poop less.

And because I call stress the ” silent killer ” of leopard geckos, I think it’s important that we’re doing everything we can to reduce it so that they don’t have to go through things like these.  Not being able to poop because your body has reached its limit is not comfortable, so if there is something that you think might be stressing your leopard gecko out that you can change, then do it immediately so that they can start pooping normally again.

Not only will it cause them to not poop or experience the other things I mentioned above, but it can also weaken their immune system and make them ill as well, so let’s make it our main mission to eliminate stress from their lives so that they can function at tip-top shape. 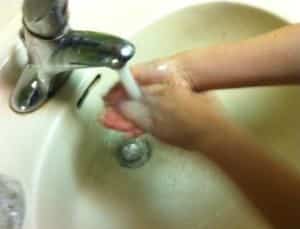 While we want to make sure our leopard geckos are healthy and pooping normally, we should be doing everything we can to make sure we’re staying healthy as well.  So when handling their poop, it’s best to have the right equipment on-hand to make sure everything is staying clean, bacteria-free, and sanitary.

In order to achieve this, you’ll need gloves, paper towels, and hand sanitizer along with washing your hands after a pickup.  The reason for this is because leopard geckos carry a bacteria that’s called salmonella, and although it is rarely harmful enough to the point where you need to visit a doctor, it can make you a little sick for a few days.

You can catch this bacteria by doing the following:

Luckily, avoiding this bacteria can be easy by simply wearing disposable gloves while picking up the poop and sanitizing the hands after you’re done.

After you’ve disposed of the poop using your paper towels, you’ll now want to dispose of the gloves as well and then put on some hand sanitizer to kill any germs that may have gotten onto your hands.

After you’ve applied your hand sanitizer, you’ll now want to wash your hands with warm water to kill the rest of the germs.  You may think that all this cleaning is going overboard, but trust me, it’s necessary.  After you’ve washed your hands, that’s it.  Your hands will be clean and you won’t have to worry about catching anything from the poop you’ve just picked up.

Knowing how often your leopard gecko poops is important because if they’re not doing it often enough, it can be an indicator of something greater that needs to be paid attention to so that things don’t get worse.

While all leopard geckos poop on different days, at different times, and in different amounts, they all do it, but how much they do it will greatly depend on how much food they’re taking in.  If you’re only feeding your leopard gecko three days out of the week, then they will likely only poop on those days.

If it’s every day, then chances are that they’ll poop every day.  But, as stated above, they all have different digestive tracts and just like humans, they do carry different genes in their body that help determine how it works.

If your leopard gecko is pooping every time you feed them, then they are likely very healthy and you shouldn’t have anything to worry about.  If you’re feeding them and they’re going days without pooping, then it’s time to look to see if impaction is the cause first and then go from there.

This is usually something you can solve at home, but if things get too bad, you may have to reach out to a veterinarian.