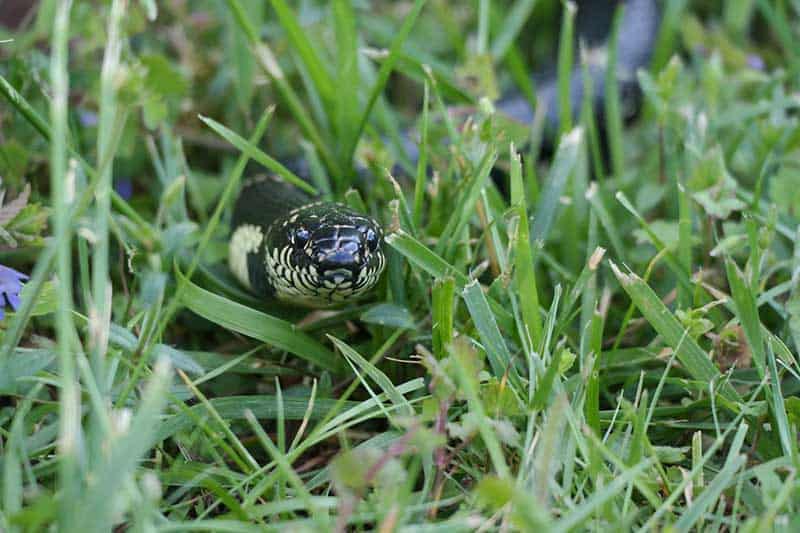 There are many different types of snakes found in the state, but there are only a few different species of kingsnakes in Alabama. Kingsnakes are named as such because they are known to prey on other snakes. They’re seldom seen and are rather elusive. If you do come across one though, they’re quite a treat to see as they do not look like other snakes.

Let’s have a quick look at Alabama’s kingsnakes!

7 types of kingsnakes in Alabama

The prairie kingsnake is also known as the yellow-bellied kingsnake. They’re found in scattered locations all throughout the state. They can grow up to 4 and a half feet in total length. This elusive snake is usually tan to brownish gray, with brown or rusty blotches down the back. The belly is a cream or yellow color with brown blotches. The young are vibrantly spotted, which fades over time.

Their mating season is in early spring, after coming out of their winter dormancy. 6 to 18 eggs are laid, but won’t hatch until August or September. They typically hunt during the day, but during the peak of summer, they actually become more nocturnal.

The prairie kingsnake eats mice and other small mammals, but they have also been known to eat lizards, smaller snakes, amphibians, small birds, and sometimes insects. They like to live in fields, prairies, woodlots, and rocky hillsides.

The prairie kingsnake is classified as being of moderate conservation concern. This is due in part to their low population and low distribution in Alabama, and also because of the prevalence of fire ants in northern Alabama. The use of pesticides also plays a part in their classification.

The mole kingsnake is a subspecies of the prairie kingsnake. It grows 30-40 inches in total. They have very smooth scales and are a light or dark brown with reddish brown spots down the back.

They mate in late spring or early summer, laying a clutch of 10-12 eggs. Like other kingsnakes, they eat a variety of animals like rodents, other smaller snakes, lizards, amphibians, and birds. They spend much of their time underground and aren’t seen very often. They like to hide under boards or natural debris of open fields or edges of forests.

The mole kingsnake is secretive and rarely seen, but they are fairly abundant in some places in Alabama. Because they’re so elusive, it is difficult to determine how distributed their population is in Alabama.

The eastern kingsnake can be found in all areas in the state of Alabama. They can grow up to 36 to 48 inches in total length and are characterized by having shiny, black, smooth scales with white or yellow chain link bands that cross the back and connect on the sides.

Eastern kingsnakes lay clutches of 4-20 eggs which hatch in about 60 days. The juveniles emerge fully formed and are brightly colored. Kingsnakes are constrictors and hunt during the day.

They eat other snakes, lizards, frogs, rodents, birds, and they especially like turtle eggs. You’ll find eastern kingsnakes  in forests, swamps, and wetlands as well as farmlands and more urban areas.

Many species of of kingsnakes, the eastern kingsnake included, are popular in pet industry.

Black kingsnakes mate in the spring and lay 3-24 eggs which hatch in early August or September. They eat other snakes, lizards, rodents, birds, and turtle eggs. Like other kingsnakes, they are resistant to the venom of pit-vipers. This allows them to kill and eat rattlesnakes, copperheads, and cottonmouths with no ill effects.

The black kingsnake has a rare morph called the black speckled kingsnake. Its black and white scales give it a unique salt-and-pepper look.

The scarlet kingsnake is also known as the scarlet milksnake and the scarlet snake. It can be found in the pine forests and sandhill regions of the lower coastal plain of Alabama. It grows 14 to 20 inches long. Its bright red, yellow, and black markings make it one of the most beautiful snakes in Alabama. Juveniles look the same as adults.

Scarlet kingsnakes are frequently mistaken for the coral snake or the non-venomous scarlet snake. It can be distinguished from the venomous coral snake by remembering the rhyme, “Red on yellow, kill a fellow. Red on black, friend to Jack.” This simply means as long a red band is never touching a yellow band, the snake isn’t venomous. However this only holds true for North America’s coral snakes.

Scarlet kingsnakes breed from March to June and will lay 2 to 9 eggs. The babies emerge after two months after being laid. They hunt mostly during the night and eat small lizards, rodents, and other snakes. The scarlet kingsnake likes to live in pinelands and hardwood hammocks. Not only can they burrow, but they can climb very well.

The red milksnake is found in Northwest Alabama, their range extends west through several other states. Red milksnakes can reach about 3 feet in length as adults. They can be identified by their dominant red bands that are outlined with black borders, separated by tan or pale bands.

T​he eastern milk snake is related to the scarlet kingsnake, but not as closely as we once thought. The milk snake is much bigger, with grey or cream colored scales and black and reddish brown splotches on it’s back. It’s named for the distinctive cream-colored triangular or y-shaped marking at the bas of it’s head.

Eastern milk snakes are found in Northern Alabama and are harmless to humans.