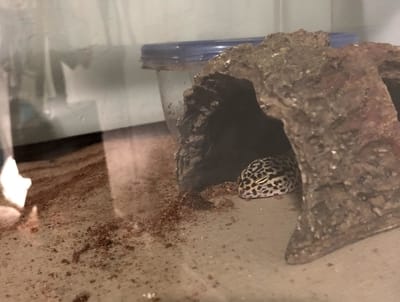 This could probably go unsaid, but I think that dealing with an animal that isn’t feeling too well is easily one of every pet owners worst nightmares.  We love our pets dearly and we don’t want to see them go through anything that could potentially be causing them pain and discomfort.  Luckily, though, there are things we can change to prevent this from happening again.  Let’s see what they are.

There are many different reasons why a leopard gecko could be vomiting, so it’s hard to pinpoint it to one thing, but usually whenever it happens, it’s caused by something that we can easily fix by making a few changes and adjustments.  Because the list above is so vague, though, I recommend reading ahead to get a little more detail as to why each reason could be making them sick. 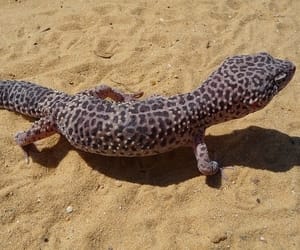 The first and most common reason for why a leopard gecko could be throwing up is because of complications from the type of substrate that you might have kept within your tank.  There are many different substrates that can cause a leopard gecko to have issues that include anything from respiratory problems all the way down to skin irritations, but when it comes to digestive complications, the cause is usually due to substrates that they have swallowed, but can’t digest.  To give you an example of the substrates I’m talking about, check out this short list here:

Because these substrates are so tiny, chances are that your leopard gecko may ingest them and potentially even vomit them back up because they can’t be broken down in their digestive tract.  That sounds horrible, but really, that’s the best case scenario.  In most cases when leopard geckos swallow substrates like these, they become impacted, which is what happens when they’ve swallowed something that can’t pass through their body and it becomes jammed up in their stomach.

Although it’s possible to try to force some of the substrate out by giving them warm baths and belly rubs, it’s not guaranteed to work and could even lead to death if not handled in a timely fashion.  Owners losing their leopard gecko due to impaction complications is not uncommon and might actually be one of the most common ways that they pass away because of how serious it can get.

If you’d like to know a much, much safer alternative for a substrate that I use that won’t cause impaction, then I recommend checking out Eco Earth coconut fiber.  Also, if you suspect that your leopard gecko may be impacted, I suggest taking a look at this article that I wrote here as well.

It goes more in-depth about the complications of impaction, how to potentially treat it, and what other substrates you should be avoiding as well.  It’s easy to pick out the wrong substrate as a beginner, so we want to make sure we’re choosing the right one the first time around to completely avoid any life-threatening complications. 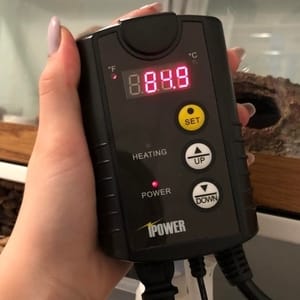 You might be wondering what the temperature of the tank has to do with why your leopard gecko can’t keep food down, but it actually has a lot do with it believe it or not.  The reason is that leopard geckos are cold-blooded creatures, and without the right amount of body warmth, they’re unable to effectively process their food.

If the temperatures in your tank are too cold, they will stay still to conserve energy and warmth and will try not to eat until the temperatures have picked back up.  If they do try to eat or if they’ve been forced to eat, then they won’t be able to keep the food down.

The cause of a cold tank can be for one of the two reasons.  The first and most common reason is because your source of heat for the tank whether that be a heat lamp or heat mat is way too low.  In that case, you’ll want to set it to where it’s supposed to be so that they’re not trapped in the tank freezing and unable to properly digest their food.

If you don’t even have a heat source, take a look at this heat mat that I use.  Most people have heat sources, but for beginners, this might be an item that you’ve just forgotten to pick up.

To know exactly what temperature you should have your tank set up at, then take a look at this article here that I wrote that goes into way more detail on everything you could ever need to know about your leopard geckos temperature.  It plays a huge role in your leopard geckos well being and should really be paid attention to in order to avoid digestive issues.

The second reason for a cold tank is because of cold weather.  If it’s cold outside, it might naturally make the inside of your room a little colder as well;  Especially during the night when temperatures drop a little lower.  For situations like these, I recommend turning the heat up in your house to raise your room’s temperature or get your hands on a space heater if that’s not an option. 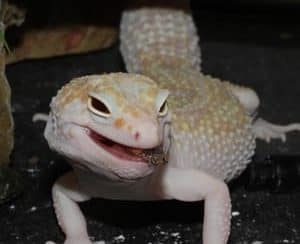 Leopard geckos have been known to get a little too excited when it’s time to eat, and as a result, they’ll eat too much and too fast.  And because their stomachs can’t keep up with their huge appetites, they’ll tend to regurgitate the food back up once their little bodies can’t take the food overload anymore.

Although leopard geckos that are affected by this are usually juveniles or babies, it can happen to any gecko at any age, so it’s best to not feed them too quickly when dealing with a leopard gecko that is a little too antsy to eat.

Most of them know their limit and will stop when full, but others will keep eating as long as you keep giving them food.  So when it comes to feeding them, make sure to hand them their food one at a time and then wait a little while for them to fully chew and digest the food until offering them anymore.

Sometimes it takes a while for them to realize that they’ve reached their limit, so giving them a little time to let the food settle in can reduce the risk of them throwing up by a pretty good amount.

If there’s one thing that leopard geckos are subjected to the most, then it’s definitely stress.  Stress can present itself in a multitude of different ways in your leopard gecko, and unfortunately, vomiting or regurgitation is one of those ways.

Because there are so many different things that can contribute to their stress, it’s hard to tell exactly what should be done to stop it.  But, if you want a good starting point, then here are a few things you can check and also make sure you’re not doing in order to reduce the risk of putting your leopard gecko through it:

As stated, there are many things that can cause them stress, but from what I’ve seen, the factors listed above are some of the most common reasons for it.  If you suspect that your leopard gecko is overly stressed, then start looking at these things first before moving on to anything else.

Make sure you’re not handling them too aggressively, reaching in to grab them from above too often, and not checking temperatures frequently to ensure that they’re not living in a habitat that is too uncomfortable for them to properly function in.

Also, make sure music isn’t playing too loud to the point where it’s shaking the tank and try not to be overly antsy when it comes to handling them as well as they like to have their space.  I’ve already listed the fix for temperature issues if that’s a problem for you and most of the other things listed can be corrected without equipment, but when it comes to not startling them when reaching in from above to grab them, you’ll want a tank that opens up from the front so that they can see you coming.

Reaching in from the top of a tank may seem like a very harmless thing to do and you wouldn’t think that it would stress them out much, but they are very tiny creatures and when something is coming down on them from above, they think that they are being attacked by a predator and will either hide or attack your hand out of defense even if they do know you.

To solve this issue, I recommend getting your hands on a tank like this one.  It’s the one I use and it opens from the front, therefore, causing a lot less stress to my gecko when I go to handle or feed him.

There are many different things that can cause a leopard gecko to vomit, so if none of the above reasons that I listed seem to be the cause for why your gecko is doing it, then at that point, it’s best to reach out to a veterinarian to take a closer at your gecko to make sure there’s nothing more serious behind why exactly they’re doing it.