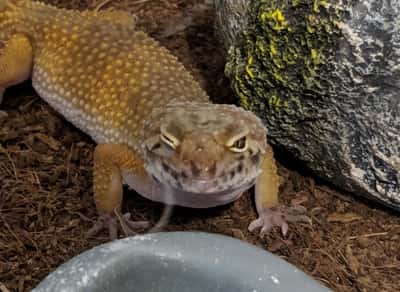 If there’s one thing that’s true about leopard geckos, it’s that they’re very unique, mysterious, and quirky reptiles.  Just when you think you’ve discovered everything about them, they do something else that may, or may not, be worrying to you.  Since this is one of those things, I want to address it so that you can have peace of mind regarding this particular behavior.

Why does my leopard gecko wink?  They’ll wink for a few different reasons, but most of the time, they’ll do it when either dozing off or just waking up.

Although a winking leopard gecko doesn’t seem like a very big thing to worry about, which most of the time it usually isn’t, there are a few things to look for that could be causing them to do it that may need to be addressed so that you’re ensuring that your gecko is in tip-top shape and hopefully, winking at you for no apparent reason.  That said, here are a few things to consider. 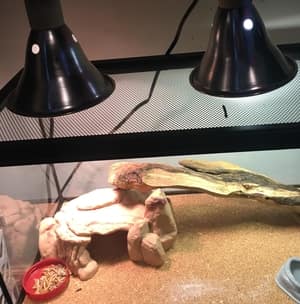 Have you ever been lying in a dark room at night and then all of a sudden someone walks in and turns the lights on causing you to squint, blink with one eye, and just overall have a fairly hard time seeing?  If so, then this is basically what happens to leopard geckos when they’re exposed to too much light at once.

Just like how the light from the sun or from a car’s headlights during the night time affect us, really harsh and bright lights affect leopard geckos as well.

If either of one these potential reasons applies to you, it’s important that you change the way your tank is set up immediately so that you can not only stop your leopard gecko from winking so frequently but also so you can prevent an uncomfortable living situation for your leopard gecko as well.

If moving your tank isn’t possible, then another alternative you can look into is using sun-blocking curtains so that you can at least have something up that will prevent the light from coming in so that your leopard gecko isn’t bothered by it whenever they’re not resting inside one of their hides.

As mentioned above, whenever your leopard gecko is sleepy whether it’s because they’re just waking up or getting ready to fall asleep, you might find that they’ll start blinking with one eye open so that they can keep a lookout on their surroundings or any movements that are happening around them before they actually do wake up or fall asleep.

You might be wondering why they do this since they’re in a tank and not in any kind of danger, but because leopard geckos are very defensive by nature, it really doesn’t matter what circumstances they’re in.

When a leopard gecko goes to sleep, they are in fact susceptible to being attacked or eaten.  But before they let their guard down completely, you better believe they’ll be watching everything around them until they end up eventually passing out.

As soon as they wake up, you better also believe that they’re going to go right back to keeping their eye on everything just like they were before falling asleep.  It might not make much sense to us considering that they’re in captivity and in the comfort of our tanks, but to their reptilian brains, it does.

Being on the defense is something they’ve had to learn to do in order to survive in the wild and as long as that’s hardwired in their brains, they will always be defensive no matter if they’re falling asleep or not.

Not only will you notice leopard geckos doing this, but other animals like cats and dogs might do this as well.  A lot of animals, in general, are very alert.  So whether they’re winking or squinting, it’s just their way of protecting themselves even though most of the time they don’t need to be protected.

It’s true that most times a leopard gecko winks or squints it’s completely normal and nothing to worry about, but in some instances, there might actually be an issue going on with their eyes that needs to be addressed.

These issues could potentially be caused by the following:

Luckily, for each one of these issues, there’s a solution.  For substrate-related issues, you’ll obviously need to change your substrate.  I use this stuff here from Amazon, but if you’d like to check out other substrates that are just as safe along with substrates that aren’t, click here to go to an article where I talk a little bit about each.

Certain substrates can not only be damaging to your leopard geckos eyes, but also to their overall health as well.  If you have any of the harmful substrates mentioned in the article above, I suggest you change it out for something a little safer immediately.

Yes, when a leopard gecko winks, it usually isn’t an indicator that something serious is going on with them.  But if they happen to be on a substrate that’s not safe, then there’s a high possibility that their might be.

For any fighting-related issues, there’s no way around it, you’ll need a new tank.  Some leopard geckos are great at getting along together when cohabiting, but unfortunately, some aren’t.  Leopard geckos are very territorial so they will sometimes fight and as a result, sustain and give out injuries to other leopard geckos within the tank.

If you have two or more leopard geckos housed together, it’s worth looking into this being a possible issue just to be safe.  If you suspect that your leopard gecko is having eye issues because of a potential injury, I highly suggest considering a tank like this one here so that you can separate the geckos once and for all.

Leopard geckos that don’t get along that are kept in a tank together for too long are not only at risk of sustaining physical injuries but they’re also at risk of going through tons of stress-related issues such as fatigue and changes in behavior as well.

That said, house your leopard geckos in completely different tanks immediately if you think that there might be animosity between the lizards for their own safety.

Last but not least, if your leopard gecko has issues with shedding off their old skin, then this could be a problem for them if it gets stuck around the eyes.  Not only can a bad shed lead to winking due to complications, but it can also lead to them going completely blind if their shed is bad enough as well.

In order to prevent that, you’ll want to make sure that your moist hide is moist and that your tank has a decent amount of humidity to help your leopard gecko have an easy and smooth shed.  Humidity can be created by misting your tank and also just by having a water dish present so that humidity can in fact be made.

When making sure your tank is humid though, keep the humidity levels between 20 and 40 percent so that your leopard gecko doesn’t experience further complications from too much of it.  The way you can ensure that you’re not exceeding these percentages is by setting up a humidity gauge like this one here.

Although winking in leopard geckos is most of the time harmless, it’s still can be unsettling to deal with if it’s something you’ve never had to deal with before.

If your leopard gecko is currently winking and you just can’t seem to find out why or are still worried about them despite finding out why they’re doing it, then I recommend calling your local herp vet and explaining to them what’s going on so that they can help with determining whether you should bring your leopard gecko in to be seen or not.

Herp veterinarians are experts in dealing with many different kinds of reptiles.  So if you’re really concerned and you need a professional opinion to give you peace of mind, don’t hesitate to reach out to one.

Fortunately, winking is a completely normal behavior for leopard geckos in most cases.  But because there are also other reasons that could cause them to wink, it’s best to look at all potential causes before assuming that it’s normal when it may actually not be.

If your leopard gecko isn’t displaying any other types of behaviors that are associated with the winking, then it’s likely that you have nothing to worry about.  Since it’s sometimes hard to tell what a leopard gecko is going through just by looking at them though, it’s best to take all things into consideration before coming to your conclusion about them.