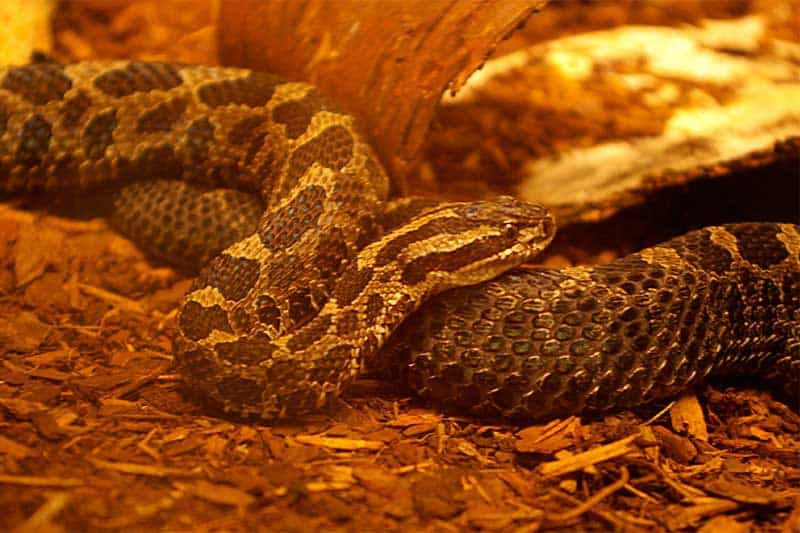 Many different species of rattlesnakes can be found throughout the United States in various areas and habitats. In Michigan, only one venomous rattlesnake is naturally found in the wild: the Eastern Massasauga Rattlesnake.

Mainly found in wetland habitats, these rattlesnakes can find ample homes in Michigan. Michigan is in the region of the Great Lakes in the upper Midwest of the United States and borders four of the five Great Lakes. Michigan has over 300 rivers, more than 62,000 inland lakes, and is the eleventh largest state in the United States (area-wise).

Keep reading to learn everything you need to know about the eastern massasauga rattlesnakes in Michigan!

The rattlesnakes of Michigan

Let’s have a closer look at this species of rattlesnake, and learn some facts about them.

Eastern Massasauga Rattlesnakes tend to be gray or grayish-brown snakes that have dark blotches and spots on their back and sides. Their blotches are also often outlined in white on their body. Their belly isn’t patterned and tends to be a shade of black.

These pit vipers also have a pit on each side of their head, between their eyes and their nostrils. Like many other pit viper rattlesnakes, they have a triangular, wide head.

On average, Eastern Massasauga Rattlesnakes prefer to live in wetland habitats. These could include bogs, marshes, wet grasslands, shrub swamps, or wetland prairies. In Michigan specifically, these snakes prefer wet habitats that are in open areas. Examples of these habitats include wetland prairies and prairie fens.

However, Eastern Massasauga Rattlesnakes in Northern Michigan differ slightly in their preferred habitat. Instead, you’ll find these snakes prefer to live in cedar swamps and lowland coniferous forests in the northern regions of the state.

These rattlesnakes also tend to change their habitat slightly when the weather changes. In the spring, fall, and winter, they can often be found in their average wetland habitats. However, in the summer, they’ll move up to drier, upland areas such as forest openings.

These snakes can also be found in parts of Canada. Normally, they’re only found in southern Ontario.

These rattlesnakes’ diets mainly consist of small mammals, lizards, and even other snakes. They’ll even eat small invertebrates, such as centipedes. Normally, however, an adult Massasauga mainly eats small mammals, often rodents, and reptiles.

Juvenile Eastern Massasauga Rattlesnakes will often only eat reptiles, such as lizards and snakes. In certain populations in the Eastern states, Massasaugas will eat frogs often enough that it will be a main part of their diet!

Eastern Massasauga Rattlesnakes aren’t actually as vicious or aggressive as many people may think, even though they are pit vipers. When compared to other rattlesnakes, they are quite tame. Instead of immediately attacking when a human or predator is near, these snakes will stay still and attempt to blend in to their surroundings so that they’re not messed with.

They will also rattle to warn off humans and predators if they feel they are being threatened and can’t properly hide. Sometimes, however, if they’re completely surprised, they will attack their opponent. Because of these snakes’ non-aggressive behavior, bites to humans are considered rare.

However, they will bite if directly threatened or handled in any way. Their venom is highly toxic, though it isn’t life-threatening to many adults, mainly because these snakes can only inject a small volume thanks to their short fangs. Small children and those in poorer health can be greatly affected by their bite, though!

A: The federal government has listed the Eastern Massasauga Rattlesnake as a threatened species in the United States under the Endangered Species Act. This means that these snakes may become endangered or even extinct in the future. These snakes have fallen in population over the last few decades because of habitat loss, as well as because many counties used to have bounties on these snakes, which resulted in many snakes being killed.

Q: Can an Eastern Massasauga Rattlesnake kill you?

A: While an Eastern Massasauga Rattlesnake’s venom is highly toxic, they actually can’t inject a lot of venom into a human when they bite because they have short fangs. As a result, as long as an anti-venom treatment is administered, fatalities are considered rare. Children and those in poor health are most at risk after a snake bite. However, the Michigan poison control center reports only about 16 bites from these snakes a year.

Q: What do you do if you get bit by an Eastern Massasauga Rattlesnake?

A: If you’ve been bit by an Eastern Massasauga Rattlesnake, it’s vital that you immediately go to the hospital as quickly as possible. Do not cut or apply suction to the bite area, or apply ice or any kind of a tourniquet. While these snakes aren’t completely life-threatening, they can be to those in ill health and children. Once a professional oversees your condition, you may be given an anti-venom treatment.