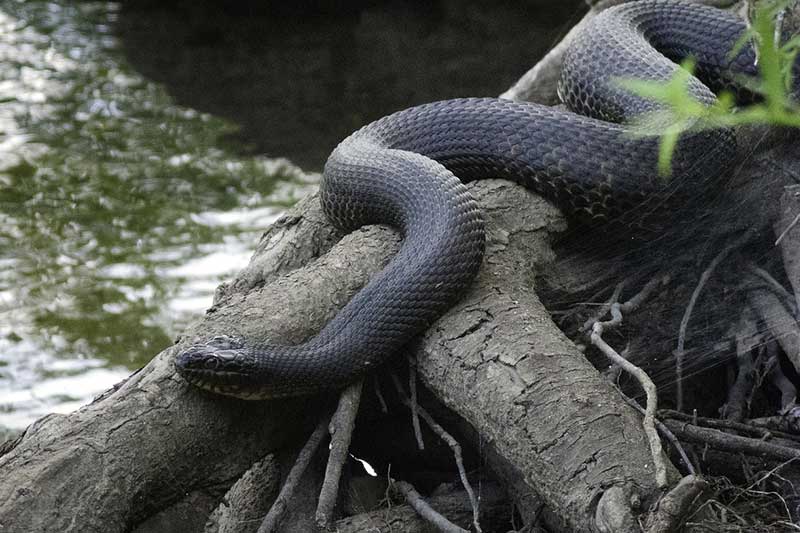 Snakes live throughout the state of Louisiana in just about every kind of environment, but there are several species that prefer to live in or near the water. It’s these snakes that we’re focusing on for this article, the water snakes in Louisiana.

With that being said, let’s have a look at Louisiana’s 6 types of water snakes.

6 Types of water snakes in Louisiana

The midland water snake is found in southeastern portions of Louisiana. Their main prey items are frogs, fish, and even other snakes. Their coloration is very similar to the copperhead and the cottonmouth, so they’re often mistaken for these two species.

The banded water snake inhabits the swamps, rivers and lakes throughout all of Louisiana. They are known to sometimes interbreed with midland water snakes. Although they are harmless and non-venomous, they have a wide, flat head and dark coloration which makes them look very similar to a cottonmouth, a species with which they often share habitat.

Like the banded water snake, diamondbacks are also common throughout all of Louisiana. The diamondback water snake enjoys basking on tree limbs above the water and hunting for its prey which includes small amphibians, lizards, mice, etc.

According to a range map on virginiaherpetologicalsociety.com, it appears as though these snakes are found in every county of Louisiana. They live in lakes and swamps but also in rivers. They’re unusual for water snakes in that they will frequently travel long distances over land to a new body of water.

The Mississippi green water snake is common in most of the state of Louisiana. This snake grows to be between 2 and a half feet to 3 and a half feet long and is mostly green or brown with dim black crossbars. Their belly features light spots on grey or brown. Females are typically larger than males and their scales are ridged.

This aquatic snake loves water, but is usually found basking on logs or brush. They are mostly active during the day and feed in the evening on small reptiles, fish, and small animals.

They are rather small in size in comparison to other water snakes in the Nerodia Genus of snakes. Primarily active at night, these saltwater snakes are not seen in freshwater and obtain the water they need from their prey. Because of their limited habitat along the coasts, these water snakes in Louisiana occur in counties near the coast.