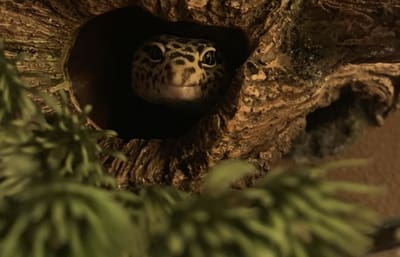 Before getting a leopard gecko, it’s important to know what you’re getting yourself into before you finally decide to take the leap in doing so. And not because they’re hard to care for. For some owners, a leopard gecko’s sleep cycle may be a little bit of a disappointment.  If you’ve been wondering, when are leopard geckos most active, then I suggest reading on as we’re about to answer that.

When are leopard geckos most active?

Leopard Geckos are crepuscular lizards and are most active at night, primarily at dusk and dawn during the twilight hours. crepuscular is actually defined as “appearing or active in twilight”.

So while many assume that these geckos are nocturnal, they are wrong. So while leopard geckos are most active during the twilight hours, they are also pretty active at night in general. Just not much in the day.

The reason why this can be disappointing for some owners is because dusk is around 8:00 PM while dawn is around 6:00 AM and for those who work or go to school, spending time with your gecko may be difficult considering that most of them do not stay up past that time.

Those who own leopard geckos may be wondering why they’re only active during the late hours of the night, but because they come from a habitat where being awake at these times is the most beneficial for them, these are the times they’re active in our homes as well.

The reason for that is because since they’re such small lizards, the cover that the dark provides them with at night helps them greatly with staying hidden from predators and also with hunting other animals and insects that aren’t able to see as well as they can at times where there is little to no light available.

This may be confusing seeing as there are no predators to hide from in the tank and also no prey to hunt at night as well, but because those two things are what they’ve had to do in the wild for such a long time before becoming captively kept animals, they’ve adapted to behaving this way and will continue to behave this way as long as they’re commonly owned household pets.

Not only does being active during these times help with hunting and preying, but it also prevents them from being exposed to the sun and potentially overheating because of that exposure as well.

Thankfully, leopard geckos that are captively kept don’t have to deal with any of these things, but because their brains have adapted to these traits as a result of living in conditions where they’ve had to do what they could to survive, they still behave this way while they’re in the safety and comfort of our tanks at home.

Remember to make time for your gecko

Making time for your leopard gecko may seem like a simple idea but when you take into consideration all of the things that you do before laying down and going to bed, time can slip away fairly quickly if you’re not managing how you’re spending it wisely.

In order to do achieve this, you’ll want to cut down on mindless activities that take up all of your time before laying your head down and calling it a night.  These things can include anything from playing video games to watching a ton of videos online and should be monitored so that you can have more time with your leopard gecko before heading off to bed.

A good way you can monitor how your time is spent is by setting an alarm for each thing that you do before you start doing it.  For example, if you’re a gamer, set an alarm for 1 hour or less and then turn the game off when your alarm goes off so that you can go and spend time with your leopard gecko.

This doesn’t just apply to video games, but to any other activity that can be cut back on that will allow you to have a little more free time as well.

Doing something as simple as limiting the time that you spend on doing other things seems like a pretty basic idea, but when you’re not watching the clock, you’d be surprised at how much time actually passes when getting caught up in things that aren’t necessarily productive.

If you consciously go out of your way to take some of the time you spend on the various different activities that you do and shift it more towards your gecko, then I guarantee that you’ll find yourself hanging out with them a lot more often than you previously had been before doing so. 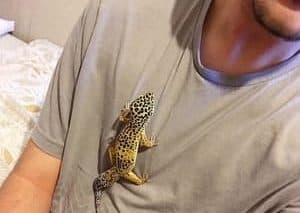 It’s one thing to just spend time with your leopard gecko, but it’s another thing to actually interact with them while you’re doing it.

Because our time with our leopard geckos can be so limited, it’s best to make the most out of it while we can by building and maintaining the bond that we have with them so that their trust towards us grows stronger and as a result, their comfortability increases while they’re around us as well.

The reason why interacting with them is important is because leopard geckos can actually lose trust towards their owners if they aren’t being interacted with enough and because of that, it might make caring for them that much more difficult than it ever should be.

One of the best ways of making sure that doesn’t happen is to physically hold them and get as close to them as possible so that they can get and remain used to you while under your care.

Leopard geckos identify people by how they smell, so if you’re frequently around them and close enough to where they can pick up on your scent regularly, then this will ensure that the trust between the two of you will remain for many years to come.

3. Bond with your gecko

Besides holding them, another way you can bond with them is by sitting in an enclosed area and letting them roam around. So that not only are you getting a chance to spend more time hanging out with them, but you’re also allowing them a little bit more freedom to walk around outside of their tank as well.

Many owners do this by going in a tub and placing their leopard geckos in there with them, but because tubs can sometimes be very small, I recommend using a playpen instead so that you’re not only giving your leopard gecko plenty of space to explore, but you’re also giving yourself a lot of space to comfortably sit down in as well.

If you’d like to know the playpen I use whenever I let my leopard gecko out of his cage, then I recommend checking it out here on Amazon.  Not only will a playpen allow you and your gecko lots of space, but it’ll also ensure that you don’t accidentally end up hurting them from moving around in an area that’s probably too small for the both of you to fit in anyway.

If getting a playpen isn’t an option and you decide to try going in the bathtub instead, just be really mindful of your leopard gecko so that nothing goes wrong while you both are in there together.

In addition to all of that, laying down and letting them crawl on you is another good way for allowing them to get closer to you.  Leopard geckos love to explore, so letting them do this will not only benefit you, but it will benefit them as well.

As long as you’re getting close to them on a regular basis and being mindful of them while doing so, then the little time that you do spend time with them will pay off the more and more you do it.

The times that leopard geckos wake up and go to sleep are can be pretty disappointing for those who have a busy schedule and can’t stay up super late every night but with enough adjustments and time management, spending time with them can work out.

In addition to spending them with them, knowing when they’re most active will also help you with knowing for yourself when to feed them and also when to turn the lights off so that they’re not being disturbed while they’re up and at it as well.

Leopard geckos don’t mind light while they’re asleep because most of the day they’re away in their hides so that they’re not affected by it, but if there’s still a source of light shining into their tanks when they’re up, then that may stress them out and as a result, might make them not feel good enough to spend time with you, eat, or do anything else that they should be doing.

Yes, owning a leopard gecko does sometimes have its downfalls, but if you know how to work around these downfalls, they’re actually not so bad.