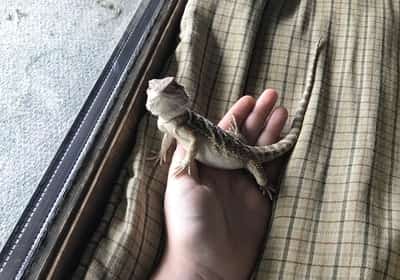 As reptile owners commonly know, one of the biggest distinctions between reptile pets and many other traditional pets is that our reptiles are cold-blooded. This means that, unlike warm-blooded animals such as mammals, a reptiles’ body temperature is not self-regulating. Instead, their temperature fluctuates along with the environment.

So why does my bearded dragon feel cold? The main reasons your bearded dragon could feel cold to the touch are inadequate vivarium temperature, time of day, brumation status, or possibly the dying process.

Three out of four of these possibilities should cause little to no concern as long as they are dealt with appropriately. Your bearded dragon’s body has been developed and evolved for thousands of years, and it is likely that some more understanding or a slight alteration in his environment can put you at ease and encourage your bearded dragon’s body to continue functioning at its best. 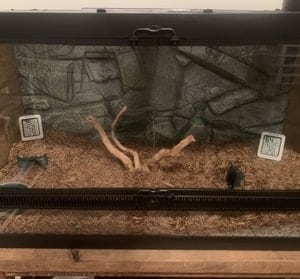 This alternation between a warm daytime and cooler nighttime simulates the conditions of the bearded dragon’s natural environment. This cooler time during the night also allows your bearded dragon to rest properly and awake with more energy during the day.

The time of day that you are feeling the coldness in your bearded dragon is also important. Because cold-blooded animals rely on and adapt external temperatures, a cold bearded dragon in the morning is likely nothing to worry about.

He would have been in a cooler environment through the night and should warm up as the day goes on and he absorbs warmth from his heat lamp. If you are noticing that your bearded dragon’s belly feels colder than the rest of his body, this also is likely not a cause of concern.

Brumation is essentially reptile hibernation. However, the behaviors associated with brumation can be quite alarming, as they overlap with symptoms of several health conditions facing bearded dragons, even the dying processes. The signs that your bearded dragon is going into brumation are:

During brumation, a reptile’s appetite decreases significantly due to a significant drop in metabolism, also causing stark changes in energy, motivation, and awake time.

In turn, this can cause your bearded dragon to feel cooler than he typically would fresh off the basking rock, but it should not cause you to be too concerned.¹

Why Do Bearded Dragons Brumate in Captivity? 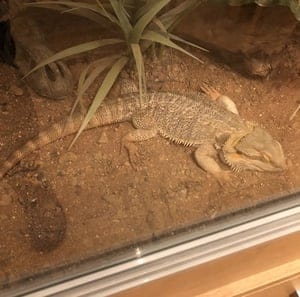 While bearded dragons are cold-blooded and heavily influenced by their environmental temperatures and resource availability, not all of their systematic processes are fully in our control. Brumation is a process developed and evolved over thousands of years and is ingrained in your bearded dragon’s biology.

However, it is important to note that not all bearded dragons brumate in captivity. Further, brumation may also occur in seasons other than winter in captivity. Because there are no external cues to induce brumation as they would be exposed to in the wild, it is not of concern if your bearded dragon begins his brumation even in spring or summer.

All in all, an extended period of your bearded dragon showing these less-energetic behaviors and feeling cooler to the touch may just be evidence of an ingrained process in his biology, and if all other elements of your vivarium are at the appropriate levels, there shouldn’t be too much cause for worry.¹

By far, the biggest concern for any pet owner is the death of their beloved companion. Therefore, we may, understandably, look into the slightest changes in behavior or condition as evidence of a significant health issue.

While this is often not the case, there are times in which it is, and there are a few ways to identify if his behaviors are warning signs for a bigger problem.

The primary symptoms of major concern in bearded dragons include shedding unreasonably or until skin appears dull and flakey, signs of brumation accompanied by weight loss, digestive impaction, eyes appearing droopy, shallow breathing, and a visible decrease in motivation (slow movements, being uninterested in food and treats for a long period, sleeping beyond normal expectations).

A bearded dragon that is cool to the touch may have an extremely low metabolism and be avoiding heat sources like in brumation.

However, noticing these behaviors, coupled with weight loss, and factoring in the age of your bearded dragon could justify feelings of worry, but cold to the touch is often not a primary indicator of a significant issue if all vivarium elements are at appropriate levels.²

Consequences of a Prolonged Cold Body

If a bearded dragon is too cold for too long, their bodies will not be able to carry out their natural processes. The biggest concern is that colder temperatures slow your bearded dragon’s digestion.

A slowed or even stopped digestion is a life-threatening issue, and at the first notice of your bearded dragon being in an unsuitable habitat (less than 70*), take action to immediately warm him up.

Drowsiness is also a symptom of prolonged cold exposure and, without warming up, your bearded dragon can continue sleeping and not wake up. Prolonged exposure is typically a period longer than 24 hours, and a few hours of exposure should not be of too much concern if addressed immediately.3

What to Do If You Can’t Immediately Warm Him 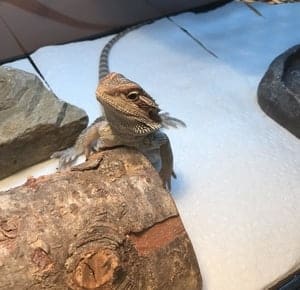 A good substitute is needed is a grain pad, which can hold onto heat for an extended time without a cord. All you need to do is microwave the grain pad for about 30 seconds (or until the right temperature) and then place it somewhere in the vivarium.

Finally, warm water bottles or warm baths are another great alternative, keeping in mind to be careful not to burn your bearded dragon. However, make sure to ensure your bearded dragon is completely dry after a bath before returning him to the vivarium. Being even slightly damp runs the risk of further lowering his body temperature as the water evaporates.3

Your bearded dragon is a part of a special class of animals that are more highly dependent on their environments than most. While a cool feature that distinguishes your friend from many typical pets, being cold-blooded requires a little extra attention to your little guy’s habitat to ensure his body can perform at its best.

If your bearded dragon is feeling cold, it may be due to the vivarium temperature being too low, it being early in the morning before he’s had a chance to warm up, him entering brumation, or possibly him facing the processes of age or illness resulting in death.

However, it is important to note that most circumstances in which your bearded dragon feels cold are not cause for significant concern. Check the vivarium temperature; see how long it’s been since his vivarium temperature was raised; assess if he may be brumating; see if his coldness is accompanied by other symptoms that may indicate a more serious issue.

If all seems clear, your bearded dragon is probably doing just fine, though he’ll appreciate the efforts made in ensuring his safety.