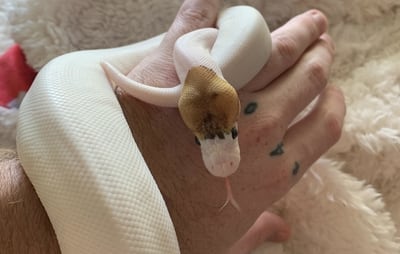 If you are like many ball python owners, you may have noticed an odd physical characteristic of your snake. Your ball python’s head may seem disproportionately smaller than the rest of its body. What causes this strange fluctuation in size compared to the rest of its body? Is this feature a cause for concern?

So, why is my ball python’s head small? While ball pythons’ head sizes vary among males and females, a significantly small head may indicate that you’re overfeeding your pet. Feeding your snake large quantities of food causes its body to grow bigger in comparison to its head. Follow the recommended guidelines based on your animal’s age.

In this article, you will learn about reasons your ball python may be overweight and growing its body at a rate faster than its head. You can learn more about what to feed (and what not to feed) your pet to keep it in great physical health. 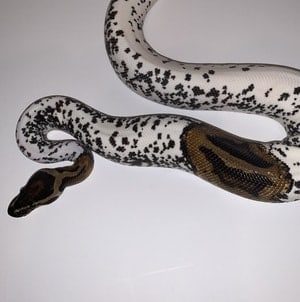 A healthy, adult ball python typically grows to about four feet long, although females are often larger than males and can occasionally grow as long as six feet. Males also typically have smaller heads than their female counterparts, and both sexes heads are characterized by a distinctive dark brown color with yellow stripes near its nostrils.

In general, pythons have muscular bodies and fully grown, can reach up to six inches in diameter. Healthy pythons do not appear overly thin (emaciated), but instead are round but not to the point of stretching their scales, which can be a sign of ill health.

When adopting a baby python, you should expect your pet to grow a foot every year for the first three years of its life. Keeping these size guidelines in consideration will help you monitor your pet’s growth throughout its life cycle and give you insight into its overall health and eating habits.

Other characteristics of healthy ball pythons include clear eyes and a tongue that flicks around as it’s being handled. Pythons use their tongue as other snakes do, using the mechanism to sense out their environment and learn more about their environment.

You may also notice your ball python curls itself into a small ball every now, tucking its head under its body. When your snake makes this gesture, be aware that it may be feeling threatened. It is not unusual for ball pythons to exhibit this behavior, as this “ball” formation is where the animal gets its name.

Like all snakes, ball pythons shed their skin, so you can expect your snake to do the same every four to six weeks. When your snake is preparing to shed, you may notice its eyes grow milky and turn a light grayish color. Your pet’s skin will also begin to take on a whitish appearance, but this feature is normal during shedding.

The amount of food that your ball python needs depends mostly on its age. For very young snakes, such as hatchlings, it is recommended to feed them just once a week. The size of the prey depends on the size of the snake. For example, for these young snakes, you want to select a mouse that is about one week old, possibly a few days younger or older depending on the snake’s size.

A good rule of thumb is to select a mouse that is no longer than the widest part of the snake’s body. Make sure to not feed your python anything bigger than this measurement, as the prey may become lodged in its throat.

Snakes that are over twelve months old should be fed less often than hatchlings and need to eat at least every two weeks. The size of the mice you give your pet should gradually increase with your snake’s body span. Pet stores sell bags of pre-killed mice that are labelled according to their size.

The smallest mice, such as the ones you should feed hatchlings, are called “pinky” mice, and they average half an inch to one inch long. “Fuzzy” mice are 1.25 to 1.5 inches, “hopper” mice are 1.5 to 3 inches, “weanlings” are 3 to 4 inches, and “adult” mice are 4 to 6 inches. Regularly monitor your snake’s width as it advances in age to ensure you are feeding it appropriately.

If your snake does not seem interested in food at its regular feeding time, there are several reasons it may be reluctant to eat. Check the temperature of its cage and determine whether it is within the ideal 80 – 85 degree range. Keep your python’s cage slightly cooler at night, around 69-75 degrees.

Alternately, your snake may be exhibiting signs of stress and may need to be handled less frequently. A recent change in cage or companion snakes may also be a reason that your snake isn’t eating.

How to Properly Feed Your Ball Python

Learning to feed your python properly is important to its overall health. Inconsistencies in your snake’s diet and feeding process can create serious problems for your pet. Whenever you are feeding your ball python, consider feeding it in a separate cage from the one it typically resides in. By moving your python to a different enclosure, it will associate the other cage with food.

This precaution will prevent your snake from associating your hand with food.

Select appropriately sized mice according to the guidelines mentioned above. When you have determined your snake’s width and the correct sized mouse, buy a pack of frozen mice, and store it in a freezer (separate from your human food).

Remove one of the mice from the bag, and place the mouse in a plastic Ziploc bag. Run warm water over the mouse until it has thawed and softened. Be sure to use a plastic bag when you’re thawing the mouse; otherwise, you may rinse away the mouse’s scent that makes it appetizing to the snake.

Never thaw the mice in a microwave, as this method can cause the mouse to heat unevenly and potentially burn your snake when it tries to eat it.

While most snakes will eat mice without issue, you may need to find ways to encourage your snake to eat. One option is to cut open the mouse to attract the snake, while another option is to dip the food in a sodium-free chicken broth to help the snake eat.

Additionally, the color of the prey may affect your snake’s appetite, so consider mice in various shades if you still have difficulty getting your python to eat.

Things to Watch Out for

One of the main reasons your python’s head may look disproportionately small compared to its body is its weight. If you feed your python more often than the above guidelines, it may be at risk for becoming overweight which is detrimental to its overall health.

To tell if your python is overweight, you can check it for certain signs. While a comparatively small head is one of the easiest red flags, you can do a more thorough check by examining your snake’s scales. The scales on a snake of a healthy weight will be relaxed, whereas an overweight snake’s scales will appear stretched apart.

You may even be able to see skin between the scales, which means the snake has gotten large enough to pull apart some of its scales.

Feeding your snake food that isn’t part of its natural diet may also throw your pet’s digestive system into distress. Some pet owners feed their ball pythons fish, but this food source is typically considered less nutritious and can lead to certain vitamin deficiencies.

As your snake prepares to shed its skin, you may also notice that its appetite fluctuates. This change in food interest is normal and will typically stabilize once the snake has gone through its shedding process. Be sure to give your snake space and feed with care during this time as it may become more agitated and stressed than usual.

Other signs that may point to your snake being overweight include scale wrinkling and folding, rolls of fat near the head (which make the python’s head appear to be even smaller), and the snake overall has a soft, squishy feeling rather than a firm body.

Always consult a veterinarian if you feel your snake has any sudden changes in weight or appearance. Only a licensed veterinarian will be able to confirm whether your snake appears overweight due to overfeeding or other, underlying health issues.

A noticeable difference between the size of your ball python’s head and its body can indicate that you are overfeeding it. Follow the recommended feeding frequency guidelines based on your snake’s age, and choose food that is appropriate for your snake’s particular size. Take care to safely adjust your snake’s eating habits, and when in doubt, consult a veterinarian to get professional advice on how best to feed your pet.