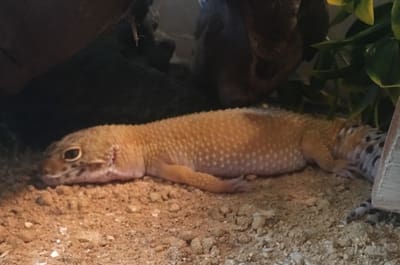 It’s odd to see our leopard geckos do some of the things that they do, but in this same odd way, it’s also extremely cute.  Laying completely flat amongst the many other things that they do can be alarming to a new owner, but after spending some time with them, you will see that they lay in many different ways that look odd to us.  But as for why they lay this way though, here’s the answer.

Why is my leopard gecko laying flat?  You might catch them laying in many different positions,  but when they’re laying flat, chances are that they are spread out like this so that they can absorb the most amount of heat onto their bodies.

Unless your leopard gecko is ill or sick, then this is usually a type of behavior that you will commonly see them display.  They have been known to lay in various different weird positions and even though they look uncomfortable to us, leopard geckos find the positions they lay in to actually be very satisfying as long as they’re soaking up the heat.  But, to be safe, I suggest reading on.

First thing’s first, as stated above, leopard geckos will lay in numerous different positions and locations in order to find a spot they’re most comfortable in, but when this laying is accompanied by other behaviors, then there may be something else at play that you should pay closer attention to.

If you know for a fact that your leopard gecko is healthy, then you have nothing to worry about, but if you’re a new leopard gecko owner and you’re not sure if they are or not, then it’s best to take a few things into consideration before assuming that them laying flat is normal.  Here’s what you should be looking for in a healthy leopard gecko:

If your leopard gecko is displaying any of those behaviors, then as stated above, you shouldn’t worry.  But, if them laying flat is accompanied by other behaviors such as not eating, not sleeping, slow movements, and overall weakness, then it’s time to take a look at their surroundings to see whether or not anything in it could be the reason for why they feel the way they do. 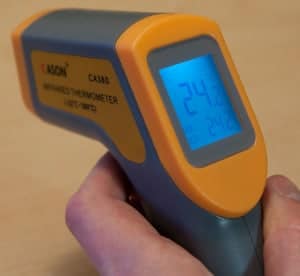 A leopard gecko laying flat is completely normal and if you share your concerns over the internet, you’ll likely find that tons of other people have leopard geckos who do the exact same thing.  But, if you suspect that something else is going on with them, then the first thing you should check is your temperature.

Temperature plays one of the biggest roles aside from calcium when it comes to how they feel, so if that’s off by a significant amount, then it can make your leopard gecko feel pretty bad.  It’s not good for them to live in temperatures that are too hot or too cold, but when it’s too cold, that is when you are most likely to see your leopard gecko laying flat on the ground and not moving in attempts to save energy and preserve heat.

To avoid running into this issue altogether or to solve it if you’re currently going through it, then make sure your temperature is set between 85 to 90 degrees Fahrenheit on the hot side and on the cold side at about 75 degrees Fahrenheit.

In order to get the right readings though, you’ll need a good thermometer to put in the tank. Without a good thermometer, it can be very difficult trying to tell whether or not your tank is too hot or too cold.

And with the influence of the weather outside and the natural temperature within your house playing a role in what your temperatures are in your tank as well, it’s important to know how hot and cold your tank is so that you can adjust them if needed.

For a way more in-depth look at the importance of your tanks temperatures and the role it plays along with other very useful information that you need to know in order to successfully own a leopard gecko, then click on this article here that I wrote to get all of that information.

Usually, whenever you catch a leopard gecko laying in an odd position, there’s nothing to worry about.  But, if they start showing other symptoms that seem a little ‘ off ‘ to you, then maybe you should start worrying just a little bit.

For example, if they start displaying any of these symptoms along with the flat laying position, then it might be time to give the veterinarian a call.  Check the symptoms out here:

If you’re taking good care of your leopard gecko then these are all symptoms that you likely won’t be seeing.  But because it’s better to be safe than sorry and not ignore their many different behaviors even if it is normal, it’s good to know what to look for just in case something is wrong with them.

The symptoms I listed above could be caused by anything from Metabolic Bone Disease (MBD) or impaction from eating substrate that wasn’t able to properly digest in their system, so this is why it’s important to pay attention to our leopard geckos whenever they display a new behavior so that we’re not running the risk of potentially losing them because we thought what they were doing was normal.

If you suspect that MBD may be the cause, then check this article out here that I wrote to know what causes it and if caught early enough, how to treat it as well.  And for more information on impaction, then click here to check out that article to learn more about that.

They Sleep in the Weirdest Positions 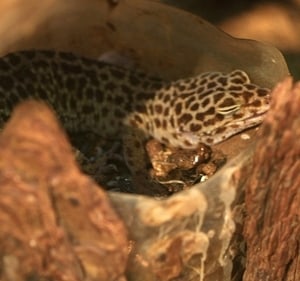 Anyone who’s owned a leopard gecko for a long time already knows this, but aside from just laying flat, leopard geckos are actually known for regularly sleeping in positions like these.  Not only that, but what’s even more interesting is that they’ll also sleep in the weirdest spots within the tank as well.

For example, instead of sleeping inside the hide, sometimes you might catch them sleeping on top of it.  Another odd place for them to sleep is in places like food bowls, water bowls, and on any other piece of equipment you might have in the tank.

At first glance, some of these sleeping spots look very painful, but apparently, they really enjoy them.  Keep in mind though that they are from the wild, so sleeping on rough and uncomfortable surfaces isn’t anything new to them.  If they can find a spot that has warmth on it and doesn’t hurt their little bellies, then chances are they’ll lay on it.

This doesn’t only go for leopard geckos, but for other geckos as well.  They aren’t picky like us when it comes to where they sleep, they’re only two requirements is that it’s not sharp and that it’s warm, and that’s it.

They love to sleep in their hides, but if you catch them sleeping outside of it in any other weird position or location, then don’t worry, it’s likely normal if they’re a healthy leopard gecko.  It might be tempting to try and move them just to make sure they’re okay, but they need their sleep, so it’s best to leave them lay in whatever position or location they’re in until they wake up.

Often times than not, if you catch your leopard gecko laying flat with their feet and legs in a weird position then that usually just means that they are spreading their bodies out in the most comfortable position in order to soak up the most heat.

It can be worrying to watch because these various different sleeping positions do look a tad bit uncomfortable, but your leopard gecko thinks otherwise.  Over the course of their life, you will find them frequently laying in these positions, and the more and more you see it, the less worried you will be.

It’s definitely concerning to see when you’re new to owning one, but 9 times out of 10, it’s just them enjoying the heat from your heat mat or lamp.  As stated above though, if you catch them displaying any other types of behavior along with the odd laying positions, then take a closer look at what the problem could be and never ignore them if you feel something might be wrong so that they don’t get worse.