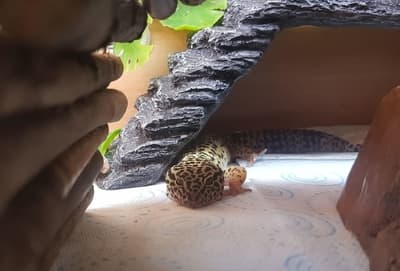 Leopard geckos are some of the cutest and most popular lizards in the world. However if you’re someone who enjoys your pets to be a little more on the active side, leopard geckos may not be the pet for you.  That’s not to say that they’re not active at all, but compared to other animals, it may seem like they are. Are leopard geckos lazy? To give you the answer you’re looking for though, let’s get straight to answering the question.

No, not at all.  Leopard geckos aren’t the most playful and upbeat animals out there, but when it’s time for them to be active they have no problem doing so.

Unfortunately, many people have been disappointed after buying their leopard geckos simply for the fact that they did not turn out the way that they thought they would be before getting them.  Their inactivity may come off as laziness but like many other lizards, their main focuses consist of eating, sleeping, and surviving.  That said, here’s when you might find leopard geckos to be the most active. 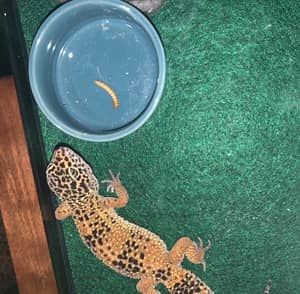 When compared to other commonly owned caged animals such as hamsters, gerbils, ferrets, or even mice, leopard geckos are not very active at all by comparison.  But when it’s time for them to feast, you better believe they’ll go from 0 to 60 real quick.

Some feeder insects that are given to them such as dubia roaches, mealworms, hornworms or any other worm stay pretty stationery to the point where your leopard gecko won’t have to put in very much work in order to catch them.

But when it comes to hunting other feeder insects such as crickets and locusts, your leopard gecko will muster up every bit of energy they have inside of them to catch their food.

The reason for this is not only because insects like crickets and locusts can hop around the tank fairly quickly, but also because leopard geckos can and will move a lot faster than usual when they absolutely have to.

Other than that though, they like to take their time when engaging in almost any other activity that they do throughout their day.  That doesn’t mean that their inactive or lazy, it just means that leopard geckos don’t like putting their foot on the gas until it’s necessary.

And in times where they’re hungry, being extremely quick and active is necessary.  In the wild, being lazy doesn’t feed mouths.  So because leopard geckos can’t tell the difference between being in the wild and being in captivity, they give it everything they have when hunting for their food so that it doesn’t get away from them.

The nighttime is when you’d expect leopard geckos to be the laziest but because this is the time when they’re most active, it may appear that they’re very lazy pets because of the fact that they’re asleep a lot of the time when most of us are up.  And as mentioned above, this is why a lot of owners become disappointed.

It’s very easy to deem a pet as being a little on the lazy side when your expectations of them are to be up and active during the daytime, but because some owners don’t do their research before purchasing their first gecko, they learn pretty quickly that these are not diurnal lizards.

Other commonly owned lizards such as bearded dragons, chameleons, chinese water dragons, and blue-tongued skinks are very active during the day.  But when it comes to these guys, it’s quite the opposite.

That said, if you’re looking for a reptile that is up when you are, then I recommend checking into getting one of the lizards listed above.  Leopard geckos are amazing pets to own, but because of their sleep cycle, they’re not for everyone.

If you don’t currently own a leopard gecko and you’d like to know when you can expect to catch them at their most active hour, then 8:00 PM would probably be that hour.

As you may know or may not know, leopard geckos are most active between the hours of dawn and dusk.  So basically that means that by the time some owners are getting ready to relax and go to sleep, they’re just waking up.

This can be saddening for some owners out there, but unfortunately, it’s the nature of owning them.  Luckily though, leopard geckos do wake up frequently throughout the day to eat, drink, or go to the ‘bathroom’.

3. While they’re being held You may not think that leopard geckos would be very active while they’re in your possession but because they’re lizards that naturally like to explore, you might find that they’ll easily crawl all over your body if you allow them to.

I don’t recommend allowing them to do this as leopard geckos don’t have sticky feet and could fall right off of you while climbing, but if you happen to be laying down with them, then you’ll be surprised where they’ll end up if you just let them roam around freely.

For example, you might start off holding them in your hand but if you let them go, before you know it, they might end up at the bottom of your feet.  If you’re laying on a bed I don’t recommend allowing them to do this as they may accidentally fall off and hurt themselves but if you’re laying on the ground, letting them roam around is completely fine.

Leopard geckos are also great at running away and hiding, so because of that, you’ll always want to keep a close on them.  Keeping an eye on them is not only important for their safety but also so that they don’t run and hide somewhere where you can’t find or see them.

In addition to that, if you have other pets in the house that aren’t caged, it can be a bad thing if they end up finding your gecko before you do.  Generally, most leopard geckos like to be hidden and can sometimes even hide in your room without you knowing where they are for months at a time.

But if they get caught by a dog or cat in the house, the chances of them surviving are very low.

Another reason leopard geckos may appear lazy is because if there’s nothing for them to interact with in the tank, there’ll be nothing for them to do besides sleep and eat.  Considering that they’re crepuscular, they’ll be spending a lot of their time sleeping anyway.

But when they are awake, you can give them a chance to be a little more active by placing certain decorations in the tank that will encourage them to do a little more than what they’re used to doing.

These decorations include things like hammocks, rock dens, and cool-looking hides.  Of course, these items are not essential for your tank, but seeing as leopard geckos are very curious lizards, it will give them something to climb on and play with while they’re up and active.

I don’t have many decorations in my tank yet, but what I do have is a rock den and I can assure you that my leopard gecko is very interactive with it when they’re awake.  If you’d like to look at the one that I have, click here and check it out over on Amazon.

As for the hammock and cool-looking hides, I don’t have those, but I can tell you that I have seen leopard geckos play with them in other people’s tanks.

Believe it or not, having things for your leopard gecko to interact with does give your leopard gecko a way to exercise and just like humans, exercising promotes healthiness, a longer lifespan, and overall wellness for the mind and body. 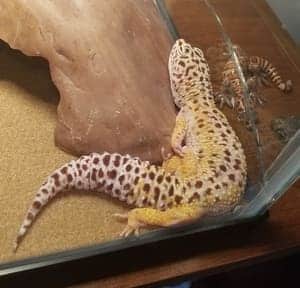 When comparing a leopard gecko to other animals like dogs, cats, bearded dragons, and birds, I’ll admit that they do seem like very lazy pets.  But even though it appears that way, it’s definitely not true.

Not only will this stress them out, but it’ll go against what they’re naturally meant to be doing.  Leopard geckos are by no means a lazy species, they just live a laid back type of lifestyle and do most of their moving around at night.

This isn’t to say that leopard geckos are never up during the day time, but because they’re crepuscular, you’ll find that most of the time they’ll be asleep while most owners are awake.