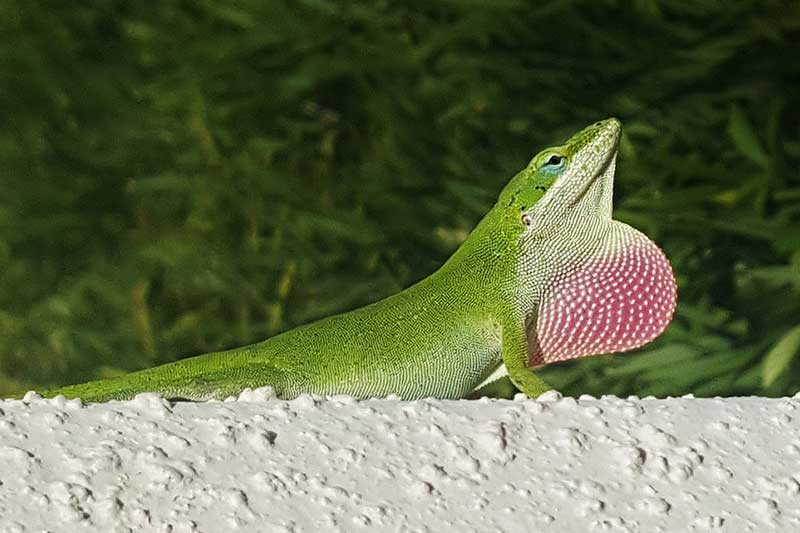 Georgia is no stranger to reptiles, who thrive in the warm climate that this southern state provides. So it’s no surprise that there would be a wide array of lizards in Georgia. If you’re a Georgian,you either have, or will at some point, see lizards in your own backyard. And wouldn’t it be nice to know about the lizardsthat you may encounter?

8 Types of Lizards in Georgia

While none of the lizards found in Georgia are directly harmful to humans, there are some lizards that are considered invasive to the state and can threaten the native wildlife of Georgia.

Some of the Georgia lizards in this list are common and others are less common, or even invasive in the state.

Geckos are small lizards that have become well known in pop culture thanks to the help of the Geico gecko. In Georgia, you can find two different types of geckos, the Mediterranean Gecko (Hemidactylus turcicus) and the Indo-Pacific Gecko (Hemidactylus garnotii).

The Mediterranean gecko measures 4 to 5 inches long and is originally from Northern Africa and Southern Europe. It was introduced to the southern parts of the United States, like Florida, when it stowed away in shipping cargo hundreds of years ago. They feast on various insects, invertebrates, and spiders. The Mediterranean gecko is mostly nocturnal, and has light gray to an almost white-colored skin that is covered in bumps.

Like the Mediterranean gecko, the Indo-Pacific Gecko measures about 4 to 5 inches long. This one, however, is native to Southeast Asia and has smooth gray or brownish skin. This nocturnal lizard will hide during the dayin crevices and cracks in homes and buildings.At night, they come out of hiding searching for food, and are often seen crawling up walls.

While you will typically find them in trees, they do seem to enjoy sunning themselves on sidewalks, roofs, and porches. The green and brown anole are active during the day, and will hide in house shingles and tree logs when the sun goes down or the weather cools.

Skinks are one of the most common lizards found in Georgia, and typically have gray or brownish colored skin.

The coal skink and the southeastern five-lined skink can both detach their tail if they become restrained. This is a useful defense mechanism they can utilize if trapped by predators. The coal skink, however, is rarely seen and not as much is known about these elusive creatures.

Skinks are typically found under logs and rocks, as well as along streams. They generally feed on insects and other invertebrates, though the broadhead skink has powerful jaws and may prey on small mammals or other lizards.

The Eastern Fence lizard is a moderately sized lizard that measures 4 to 7.5 inches long, and has a brown, rust, or grayish skin color. They can be found as far north as New York, and as far south as Florida. They are also found as far as Texas and Colorado.

Eastern fence lizards prefer to live in the grasslands or at the edge of hardwood and pine forests. They take shelter under rocks, logs, and wood piles during the evening, but will come out in the day to sunbathe.

The Texas Horned lizard, one of the many native reptiles in the state of Texas, is an unusual-looking reptile with numerous horns protruding from its head and body. Small populations of this species have only recently been showing up in the state of Georgia as well as neighboring states like Florida and the Carolinas. Most likely through the pet trade.

Despite it’s menacing appearance, this lizard isn’t harmful. When they become angry or try to defend themselves, they will puff up their body to give them a larger appearance.

They can also squirt blood from the corner of their eye, which confuses their attacker. The Texas Horned lizard likes to dig for nesting and hibernation, so it’s not uncommon to find them in loose soil.

The Six-Lined Racerunner is a fast lizard, reaching speeds of up to 18 mph, with a black or brownish-colored body that features six yellow stripes. These stripes start at their head and extend down to their tail.

The Six-Lined Racerunner measures about 6 to 9.5 inches long. This lizard likes to call open woodland and grassland areas their home, and can be found in sunny and dry areas. They are almost always seen on the ground, but due to their speed, they are difficult to catch.

While the glass lizard does look more like a snake, it is actually a member of the lizard family. They do have legless bodies that are long and slender, which is why they are often mistaken for snakes. However, these unusual lizards do not have a flexible jaw, and they have moveable eyelids and external ear openings, which makes them not a snake.

The Argentine Black and White Tegus is a massive lizard when compared to the other species on this list. They can weigh in at over 10 pounds and grow up to 4 feet long. These large South American-native lizards are active during the day, and huff or run straight at the feet of their attacker when provoked.

The Argentine Black and White Tegus is listed as an invasive species that consumes the eggs of various Georgia wildlife, including ground nesting birds (such as turkeys and quail), alligators, chickens, and gopher tortoises, as well as various small animals, fruits, plants, vegetables, and even pet food. Tegus are more of a problem in Florida, but they are expanding north.

Because of this, they can have a major impact on the wildlife, and may even spread parasites that can pose a serious threat to native wildlife and cause possible bacterial contamination to crops. According to the Georgia Department of Natural Resources, research has shown that they can carry salmonella.