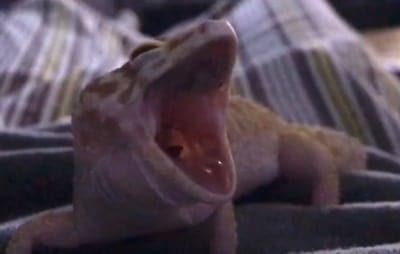 Leopard geckos are not lizards that are overly aggressive by nature, but when provoked, they can be if absolutely necessary.  If your leopard gecko is hissing at you then usually there’s always a reason, but because there’s so many, it can sometimes be hard trying to find out exactly what’s causing them to behave in that way.  Hopefully with this article, though, you’ll find that reason.

It may be disheartening to know that your leopard gecko potentially sees you as a threat but don’t worry, you can gain their trust.  Even though they’re hissing at you now, there are some things that you can and also shouldn’t do so that they no longer see you as one.  If you’d like to know what these things are, I highly suggest reading on so that you can resolve the issue once and for all.

Spooking Them From Above 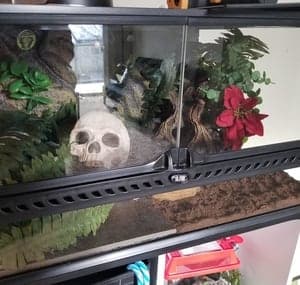 Leopard geckos are brave little lizards, but in certain situations, they can definitely become spooked.  Because they can’t tell whether they’re in captivity or in the wild while in our enclosures,  it’s very easy for them to get spooked if they feel that there is a threat nearby.

We know that we’re not threats, but because leopard geckos are incapable of thinking logically, they don’t.  And because of that, we have to show them that we’re not so that they’re not afraid and don’t hiss at us every time we try and get near them while getting close to their tanks.

There are a few ways to do this, but the first way is to stop placing your hand in from the top of the tank altogether.  When doing this, not only will they be freaked out, but they also might attack you as well.

It’s not personal or anything, it’s just that they have very primitive brains and are not very good at telling their owner apart from a threat whenever the owner is approaching them from an angle in which they’re not able to see very well.

In order to prevent this, there’s only one thing that can be done and that’s to purchase a tank that opens up from the front.  Nowadays it seems that most tanks do, but because there are some owners out there that don’t have front-opening tanks, I feel like it’s something still worth mentioning.

Here’s a tank that we recommend over on Amazon, from Exo Terra. That is the tank that I have and because I’m able to stick my hand in through the front, I don’t have any issues with my gecko accidentally mistaking me for a predator that’s looking for its next meal.

No matter if you’re picking them up incorrectly or holding them in a way in which they don’t like, leopard geckos are not lizards that like to be handled roughly.  Not only will handling them in a careless manner make them resentful towards their owner, but it’ll also put them at risk of potentially breaking a limb or extremity as well.

I’m hoping all owners who read this don’t handle their leopard gecko in such a way, but if you do, then this is probably the reason why they’re hissing at you whenever you try to interact with them.

In addition to everything else mentioned, leopard geckos who are frequently mishandled are also hard to care for and the reason for that is that when they’re handled poorly, they lose a lot of trust for their owner.

And it may not sound like that big of a deal but when it comes to leopard geckos, trust is everything.  They’re unable to feel emotions and they don’t have feelings, but what they do have for their owners that makes them comfortable being around them is trust.

If that’s broken then not only will they hiss, but they’ll also attack and behave overall very aggressive towards their owner until their trust is earned again.  That said, handle your leopard gecko with care and this is something that you shouldn’t have to worry about.

From what I’ve seen, most owners do a very good job of making sure that they’re not mishandling their gecko but because there are so many owners out there, it is something that happens and has happened a lot in the past.

Unfamiliar With Their Environment 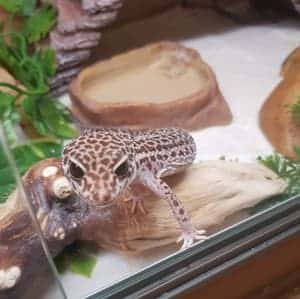 If there’s one thing that’s true about leopard geckos it’s that they’re not very good at adapting to environments that they’re not used to.  Change can be intimidating for them and when they’re first brought home from the pet store, intimidation is exactly what a lot of them experience.

Not only are their environments intimidating but their owners are as well.  Unfortunately, though, there’s no way to make them feel any less intimidated then by caring for them the best that you can and allowing them to get used to their new environment on their own.

If you treat them well, over time, they’ll start to warm up to not only their surroundings but to you as well.  Until then though, you might experience hissing, fear, and aggression from your leopard gecko all while they’re still settling in.

Almost all leopard geckos will go through this phase when first bringing them home but how long they go through it will be completely dependent on the owner and how long it takes for the gecko to get comfortable.

In addition to that, leopard geckos will also start acting out aggressively if you’ve recently moved things around or added new things into your enclosure.  I’m not sure why they do this, but for some reason, they hate when things are changed in such a way that makes them feel like they’re in a completely different environment, even though they’re not.

Fortunately though, when given enough time, they’ll eventually get used to the changes made and start behaving normally again as if nothing ever happened.

While Going Through a Temporary Change

As most of you know, change is a normal part of life.  Not only do we as humans change but our pets do as well.  Leopard geckos aren’t capable of making changes based on emotion like we can but they can make a temporary change when going through something such as a shed or anything else that may put them a little on edge.

Because things like shedding and pregnancy can cause your leopard gecko to become a little aggressive due to all of the stress and wear that it puts on their body, it’s no surprise that you might catch them hissing at you whenever trying to give them attention under either one of these circumstances.

That said, if your leopard gecko is in fact going through a shed or is gravid (pregnant), give them their space.  Aggressive behavior during times like these doesn’t mean that your gecko doesn’t like you, it just means that what they’re going through is causing them to be a little moody.

And because humans go through the same thing whenever they’re experiencing something that’s happening to them that stresses them out, it’s only right that we’re understanding whenever our geckos go through it.

Luckily for you though, this behavior doesn’t last very long and will subside whenever what they’re going through subsides as well.  Leopard geckos are gravid for a longer period than when they’re shedding.  So how long it’ll take until the hissing stops will depend on exactly the thing that causing them to do it.

Just remember to be patient with them, respect their space, and understand that whatever’s causing them to be a little on the aggressive side will go away within time. 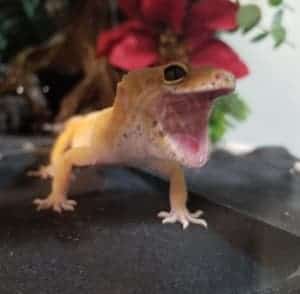 Although hissing is a normal behavior, it is something that you shouldn’t have to deal with on a frequent basis.  Whenever they hiss, it’s for a reason.  So whenever you catch them doing it, find out what that reason is and then give them their space so that not only can they get through it but also so that you don’t get bitten or attacked as well.

A hissing leopard gecko isn’t an indicator that they’re mean or aggressive by nature, it just means that they’re on the defense and a little agitated likely because of something they’re going through.

If they’re not going through anything that you know of then at that point it’s time to explore other possible reasons.  There are so many different reasons as to why they would do it but as responsible and loving owners it’s our job to find that reason so that we can act accordingly.

If you don’t think that the potential reasons that I listed are what’s causing them to hiss then think of other things that could be.

Are there other lizards in the tank that could be causing them to be stressed out?  Did you just bring them home and haven’t given them enough time to get used to you yet?  These are all things that you should ask yourself so that you can find out exactly what’s going on once and for all.