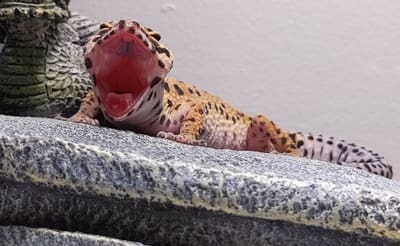 Leopard geckos aren’t very vocal lizards, but from time to time, you may randomly hear them make various different noises that you’d never expect for them to make.  These noises include chirping, screaming, and of course, squeaking as well.  Despite how odd these noises seem, they usually have a meaning behind them that may help you understand why they’re made.

Why is my leopard gecko screaming?  You will usually hear them squeaking when frightened, threatened, or even when mating.

Why they squeak under these different circumstances is unknown, but for many leopard gecko owners, those three reasons are when they’ve said they’ve heard them do it the most.  Unfortunately, there’s not much we can do about their squeaking while mating, but for the other reasons, there are some things that can be done that can stop them from doing it as often.

Reaching in from the Front Instead 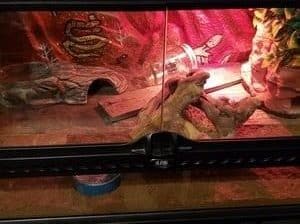 For those that don’t know, leopard geckos are naturally defensive lizards, so when they see something coming for them from above, naturally, they get spooked.  As a result of this, not only will they potentially squeak, but they might also become very stressed out as well.

Because of that, I suggest that all owners get rid of their tanks that can only be accessed from the top and as a replacement get one that opens up from the front instead.

Doing that may seem like a pretty major move to make over something so little, but if you know anything about how stress affects leopard geckos, then you should know that getting a tank that will prevent them from getting to that point is necessary for their wellbeing.

Their squeaking is cute, there’s no doubt about that, but unfortunately, they don’t do it for our entertainment.  Sometimes they will squeak for no reason but other times it might be caused by the owner scaring them so because of that, I recommend you check out this tank here from Amazon.

A leopard gecko could know you for years but even then they can still get scared by you if you only have a tank that allows you to reach in from the top.  Our hands to them look like large predators and when that’s something they’re constantly having to experience on a day-to-day basis, things can start to get a little stressful.

So in order to avoid putting them through that all of the time, consider getting a front-opening tank instead.

They See a Threat

As stated above, leopard geckos are naturally defensive animals, but because they come from an environment where they’ve had to really watch their surroundings for predators, they’re very offensive as well.

If leopard geckos see anything larger than them, even their owners, they might feel a little threatened as a result.  The same applies to other animals in the house such as dogs, cats, or maybe even another leopard gecko that you may have in the tank.

Squeaking isn’t exactly the best way to tell something that they’re a threat, but when it comes to leopard geckos, it is.

This isn’t something that you can expect to hear them do every time they see something or someone that’s larger than them, but when they do make the noise, then there’s likely something in their view that’s presenting itself as a threat to them whether that person or animal is actually trying to harm them or not.

While this may happen on occasion from spotting things outside of the tank, it’s more of a problem when they do it if reacting to something that’s in the tank.  Some owners cohabit and because of that, they’re taking a gamble with knowing if the lizards will even get along or not.

When you hear one of the leopard geckos start to squeak and they’re doing it frequently, then that should probably tell you that they see that other gecko as a threat and that you should move them into a different enclosure before things get bad between the lizards.

There’s nothing wrong with cohabiting and it can work out, but because there’s always that chance of one leopard gecko being in fear of another one or that they might start fighting due to the need for dominance, it’s best to have another tank on hand so that you can do a quick separation in the case that something like that happens.

In addition to that, certain insects like crickets might make them squeak as well because of how aggressive they can get when left in the tank.  Crickets are capable of biting your gecko, stressing them out, and bouncing on them while they try to mind their business if left in the tank too long.

Because of that, your leopard gecko will likely feel very stressed out, overwhelmed, tired, and potentially even scared or threatened because of how overpowering crickets can be when they start attacking them in numbers that your gecko simply can’t handle.

If you’re an owner that leaves your crickets in the tank with your leopard gecko, then please don’t.  Crickets may seem harmless, but they can actually do a lot more damage to your gecko if left in the tank for too long than you think.

So if you hear a squeak and you have crickets in your tank, that’s likely the reason why they’re doing it.  They can be threatening, harmful, and annoying at the same time.  If you’d like to learn more about what crickets are capable of, then click this article here that I wrote for more information.

Some Don’t Enjoy Being Held 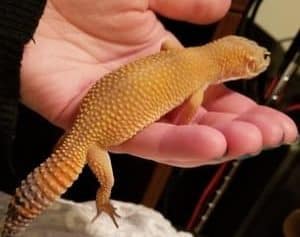 A lot of leopard geckos look the same, share a lot of the same traits, and behave in the same manner, but a lot of them have their own unique personality and because of this you may find that there are things that you do that they simply just don’t like, or like, because of how they are.

For example, some leopard geckos love insects like dubia roaches while others don’t, or are even more aggressive than others are.  Does that mean that there’s something wrong with them?  No, absolutely not.  That just means that they have their own personality and dislike and like what they choose to dislike and like.

The same thing goes for when they’re held.  Some leopard geckos love it but others, not so much.  Not only will some of them squeak in an attempt to let you know that they want to be put back into their tanks, but some of them will actually poop on you as another way of telling you as well.

If your leopard gecko only squeaks while picking them up, then consider yourself lucky.  No owner likes to be pooped on, but unfortunately, it happens.

In fact, it happens so much that I wrote a full article on it.  If this is something you’re experiencing with your leopard gecko in addition to the squeaking, then check out this article here that I put together on how to stop them from doing it and the steps that you should take after they’ve done it as well.

Squeaking and pooping at the same time may not be very common, but because anything is possible with these little lizards, I wouldn’t put it past them.  Leopard geckos who do this usually, for some reason, don’t have trust in their owners.  So because of that, they may display fear by squeaking or doing whatever else they can do to have you put them down.

If you feel that your leopard gecko doesn’t trust you or you haven’t taken the time out to create a bond with them, then I suggest you do that as soon as possible.  If you’d like to know how, here’s another article I wrote on how to do just that.

As you can see, there are many reasons why a leopard gecko will start making random squeaking noises but because some of these reasons could actually be harmful to them, it’s our job as owners to find out why they’re doing it to not only ensure their safety but their overall wellbeing as well.

Despite how cute the sound may seem, it’s never a good idea to ignore it unless you know for a fact that they’re safe and not in any kind of danger.  For example, if you hear them squeak and they’re in their tanks with nothing in it to cause them any harm, then it’s nothing that you should worry about.

But, if there’s another gecko in your tank or if you have an insect in there such as a cricket then it’s definitely something that you’ll want to investigate immediately.

The occasional squeak here and there is probably nothing you should be worried about, but if they’re making it on a consistent basis, then you’ll want to do whatever you can as a loving owner to find out why they’re doing it.