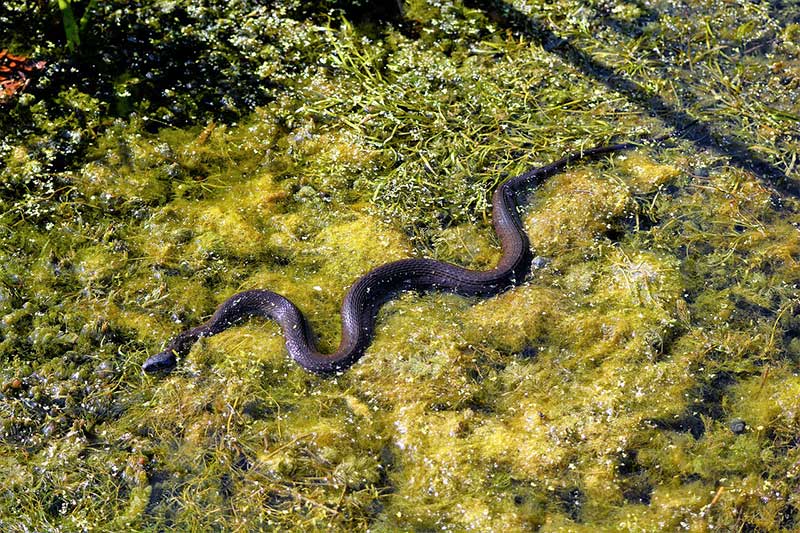 Snakes live throughout the state of Mississippi in just about every kind of environment, but there’s a Genus of snake species that prefer to live in or near the water. It’s these snakes that we’re focusing on for this article, the water snakes in Mississippi. Having said that, all species on this list of Mississippi snakes (aside from the bonus snake at the end) will fall under the Genus Nerodia, true water snakes. There are 10 main species of water snakes with even more subspecies, and 6 of them can be found in Mississippi.

With that being said, let’s have a look at Mississippi’s 6 types of water snakes.

6 Types of water snakes in Mississippi

The midland water snake is a subspecies of the common water snake that’s found throughout most of Mississippi. Their main prey items are frogs, fish, and even other snakes. Kingsnakes also are known to feed on other snakes. Their coloration is very similar to the copperhead and the cottonmouth, so they’re often mistaken for these two species.

The banded water snake, more specifically the broad banded water snake which is the western variant of this species, inhabits the swamps, rivers and lakes in western and southern Mississippi. They are more common in Louisiana, eastern Texas, Florida, and north along the coastal plain into the Carolinas.

They are known to sometimes interbreed with midland water snakes. Although they are harmless and non-venomous, they have a wide, flat head and dark coloration which makes them look very similar to a cottonmouth, a species with which they often share habitat.

Plain-bellied water snakes are named for their bellies, which, while often red, can also be a very plain color. Nerodia erythrogaster is also known as the red-bellied water snake. These snakes can be heavy-bodied and their bright underbodies make them stand out of other types of water snakes.

These snakes occur in most of Mississippi, especially in lakes and swamps but also in rivers. They’re unusual for water snakes in that they will frequently travel long distances over land to a new body of water.

According to tn.gov, Mississippi green water snakes occur in western Mississippi along the Mississippi river. This species is more common in surrounding states in the Southeast like Georgia, Louisiana, Arkansas, Mississippi, and Tennessee. These medium sized snakes are usually dark green or brown in color and have fairly stout bodies.

Diamondback water snakes are common throughout Mississippi. The enjoy basking on tree limbs above the water and hunting for its prey which includes small amphibians, lizards, mice, etc.

They are rather small in size in comparison to other water snakes in the Nerodia Genus of snakes. Primarily active at night, these saltwater snakes are not seen in freshwater and obtain the water they need from their prey. Because of their limited habitat along the coasts, they are not commonly seen in Mississippi unless you live neat the coast.

When you think of water snakes you likely think of the water moccasin, aka cottonmouth.

However, water moccasins aren’t technically water snakes in the Genus Nerodia. Cottonmouths are infamous, and have an undeserved reputation as aggressive snakes.

They never venture far from the water and are often seen swimming, which kind of makes them seem like venomous water snakes. In Mississippi, these venomous snakes can be found throughout the state.

Water moccasins are dark brown or black on top and the same on their bellies. Younger snakes can have a light pattern on their backs but tend to get darker as they mature.

They feed on fish, amphibians, and reptiles just like regular water snakes. Cottonmouths are highly venomous and a bite should be treated quickly. If you see one or aren’t sure what species it is, when in doubt you should always avoid snakes just to be safe.